These three men were the only drivers in IndyCar history to win four Indianapolis 500 titles before today. On the 20th anniversary of Helio Castroneves’ first 500 win, the driver claimed his fourth race victory. Castroneves had been trying to join the ranks of Foyt, Unser, and Mears for 12 years and his journey came to fruition on Sunday. After his win, it was clear that one of the best drivers in IndyCar history had not lost his confidence.

“Let me tell you, it’s not the end of it, it’s the beginning. I don’t know if this is a good comparison or not, but Tom Brady won the Superbowl, Phil Mickelson won the Masters, and now here you go. So, the older guys still get it, still kicking the young guys’ butt. We teach them a lesson.”

After Castroneves crossed the finish line, he departed his car, and his inner-Spiderman took over as he scaled the finish line fence. The 135,000 fans in attendance could not get enough of this historic moment, and many began to climb as well in honor of the four-time champion.

Castroneves soaked in the fans seated on all four corners of the Indianapolis Motor Speedway oval during his victory lap along with his wife, daughter, and his owner Mike Shank.

The Drama Started with Stefan Wilson

Scott Dixon, the favorite heading into the race, never had time to settle into the lead position. He was passed by Rinus VeeKay heading on turn three of the second lap. He regained the lead, but the pole sitter only led seven laps in the race.

Dixon was content sitting behind the leader early in the race, but there was a significant flaw in his fueling strategy that cost him the race before he had time to make his move.

Andretti driver Stefan Wilson pulled into the pits on lap 31 for his first stop of the day and lost control of his car. He smashed into the wall and tore off the front right corner of his car. This was the first of two yellow flags on the day. 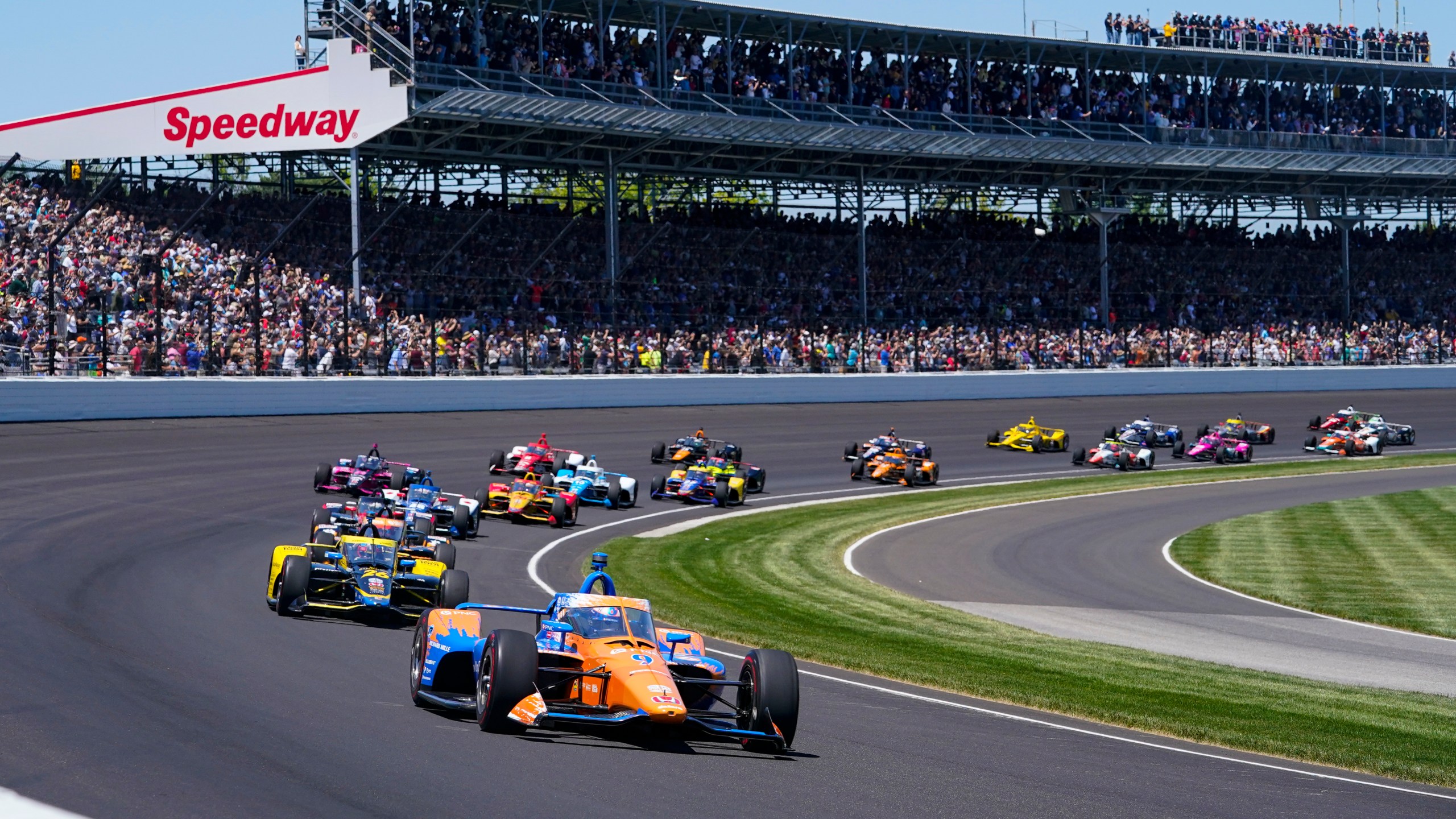 Scott Dixon leading his only lap in the 105th Indianapolis 500

The drivers who had already stopped were lucky because the pits were closed for cleanup. Drivers were allowed to splash their tanks with gasoline, but they could not complete a full stop.

Dixon tried to stay out until the pits reopened, but he should have come in one lap earlier to splash his tank because he ran out of gas heading into his stop. His engine would not refire because his tank was empty, causing him to go a lap down in the race by the time his crew fixed the issue.

Alexander Rossi and his team made the same mistake, and the driver joined Dixon in the back of the pack. Dixon’s car was strong all month, and it showed as he was able to finish in 17th after the error, but the few cautions in the race gave him no chance of being competitive.

Rossi could not recover in any capacity after the fueling miscue, finishing the race in 29th.

Conor Daly worked with his Ed Carpenter Racing teammate Rinus VeeKay to climb from 19th to the lead for a portion of the race. Daly took the lead on lap 84 until VeeKay overtook him at lap 103 before both drivers headed to the pits.

Daly, a native of Indianapolis, continued to run strong until he took an extra pit to repair his front wing after he was hit by Graham Rahal’s runaway wheel.

Rahal pitted on lap 118, but his right rear wheel was not adequately tightened when he departed. The driver had no chance after his crew’s mistake, and his wheel came off at turn two. The Rahal Letterman Lanigan Honda slammed into the SAFE barrier, which brought abruptly ended Rahal’s championship dreams.

Fortunately, nobody on the track or in the stands was hurt by the wheel after it hit Daly’s car. However, the crowd was upset because the hometown Hoosier dropped from the lead to tenth in the race’s final caution.

Palou and Castroneves Battle Down the Stretch

After the action resumed on lap 124, the rest of the race was green. Alex Palou, in his second career Indy 500 start, gave Helio Castroneves everything he could handle. The two were running behind Felix Rosenqvist and Takuma Sato, who needed a caution in the final laps to have a chance to win.

Since the race stayed green, the drivers were forced to pit. Sato went in one lap after Rosenqvist on 193, which set up the Palou and Castroneves battle with seven to go in the 105th Indy 500.

Castroneves passed Palou for the lead on lap 193 before Palou regained the top position on 196. It looked like Palou was going to claim his first Indy 500 win after he held off Castroneves for a lap.

Although, the veteran stayed composed and took his shot on the first turn of lap 198. Palou did not have enough speed to regain the lead, and Castroneves captured his fourth Indy 500 win by 0.4928 seconds. 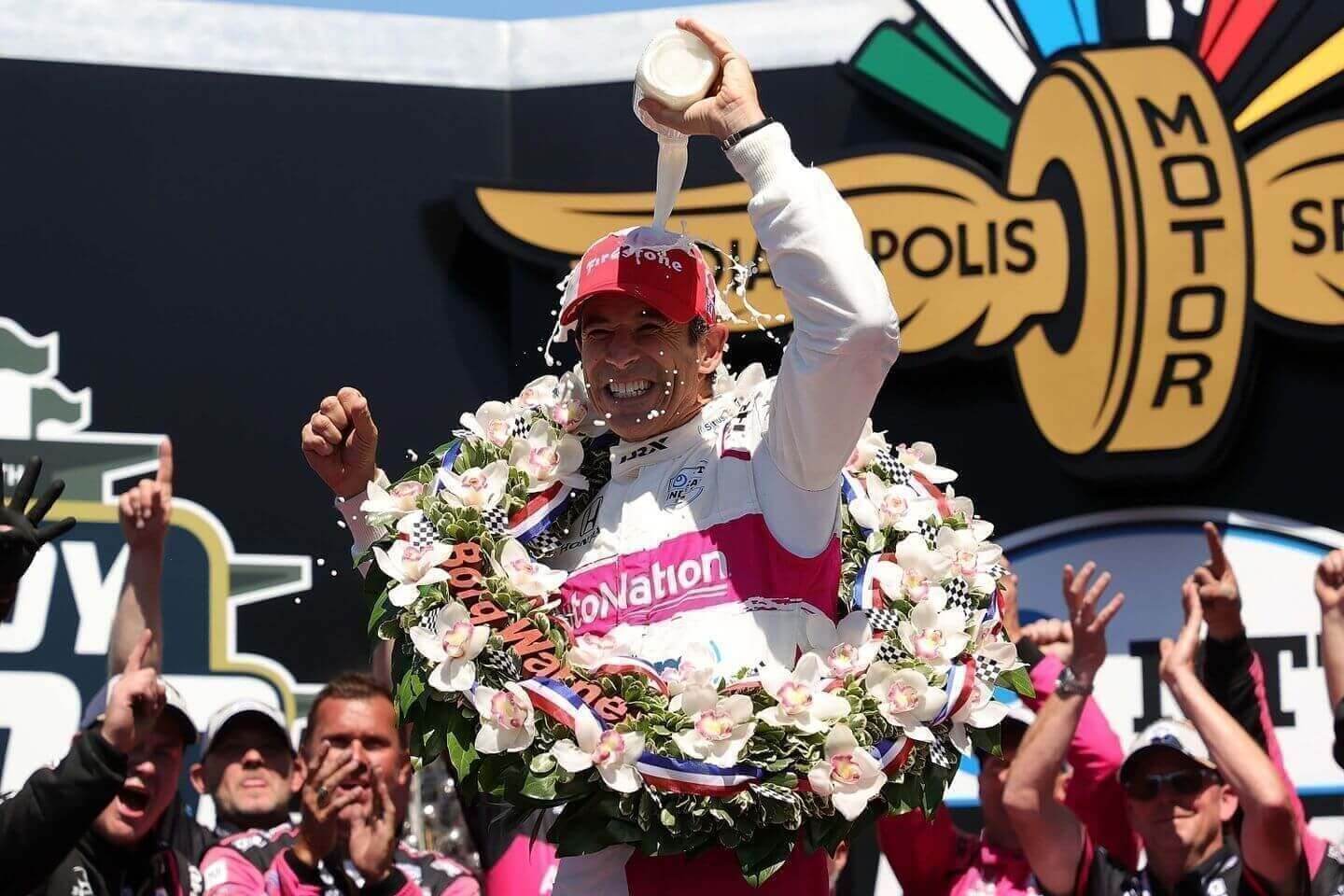 He was followed by Palou, Simon Pagenaud, Pato O’Ward, and Ed Carpenter, which rounded out the top five. The 2021 race was the fastest Indianapolis 500 ever, with an average speed of 190.690 mph.

Castroneves was emotional after capturing his fourth race title.

“I have so many guys here for a first time, absolutely first time. But no one ever gave up, no one had a doubt, and they gave me an incredible car. What I needed to do was just hit it out of the park and then we did it.”

For the results of the 105th Indianapolis 500, click here.

The next race in the NTT IndyCar Series is the Detroit Grand Prix on June 12th.