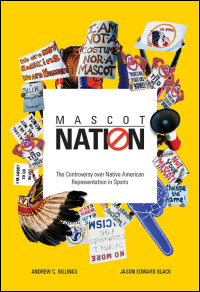 Is there a controversy over mascots in this country? Do the Native Americans rise up in uproar over teams that use a mascot of their past? Those are real questions that every reader should ask as they are reading this book.

The authors detail some of the issues that arise culturally with names like Redskins and Seminoles and a host of others. But in the long term, nothing changes and there are several instances of the Native American population getting paid off to allow the insensitive treatment that they are screaming about.

The authors, Billings and Black, race several key questions about the passion behind the concerns of sports mascots. What voices are being heard and has this nation gone so far beyond the point that they are numb and insensitive to the Native American plight?

They examine how people view a mascot through the lens of culture, race, ethnicity, ritualistically and performance markers. Sports fans are basically blind to what is the meaning behind a mascot. It is just another name for the team, too many.

Can common ground be worked out between all parties?

This book is a bit of a difficult read with many words used in the research world and not by the common reader. It is also best suited for those that have a concern about how mascots are viewed. It is more a social issues book than a sports book.

Andrew C. Billings is a professor and Ronald Reagan Chair of Broadcasting in the Department of Journalism and Creative Media at the University of Alabama. He is the coauthor of Olympic Television: Broadcasting the Biggest Show on Earth and Media and the Coming Out of Gay Male Athletes in American Team Sports.

Jason Edward Black is chair and a professor of communication studies at the University of North Carolina at Charlotte. He is a co-editor of Decolonizing Native American Rhetoric: Communicating Self-Determination, the author of American Indians and the Rhetoric of Removal and Allotment, and co-editor of An Archive of Hope: Harvey Milk’s Speeches and Writings.