The UCLA Bruins, after making a run to the Pac-12 title game, cut it very close in their first round matchup with the Akron Zips. Akron was up by one at halftime and held the lead for most of the second half as well.

UCLA shot an abysmal 35% from the field against Akron and were bailed out by atrocious 3pt shooting from the Zips (24%). After halftime Akron went on an 11-3 run that gave the Zips a seven point lead with six minutes remaining.

Just over three minutes later that lead was erased and UCLA was back up by one. The Bruins would close out the game very strongly, making a 7-2 run to end the game.

Akron fought till the end

#13 Castaneda fought hard for the Zips

Akron’s Enrique Freeman was the main piece of the puzzle for the Zips, putting up 14 points and ten rebounds in his sophomore season’s final game. Xavier Castaneda also had a phenomenal game and had 18 points, six rebounds, and an assist.

Akron ended their regular season on an eight game winning streak and it’s easy to see why. They just brought it to one of the best teams in the country and did not hesitate to push the tempo.

Akron had a few rough plays late in the game including multiple drives to the basket that resulted in less than ideal shot attempts. The Zips had a good chance to win, as they were up four with 2:15 left in the game. They blew their lead and lost 57-53.

Last year the Bruins were an 11-seed but made it all the way to the final four where they lost to runners-up Gonzaga. This year they return as a four-seed looking to take an easier path to the Final Four.

However, the first round clearly was not as easy as they’d have liked. UCLA was even with Akron in rebounds, both teams with 34. UCLA needs to work on that as they’re 117th in the country at rebounding. 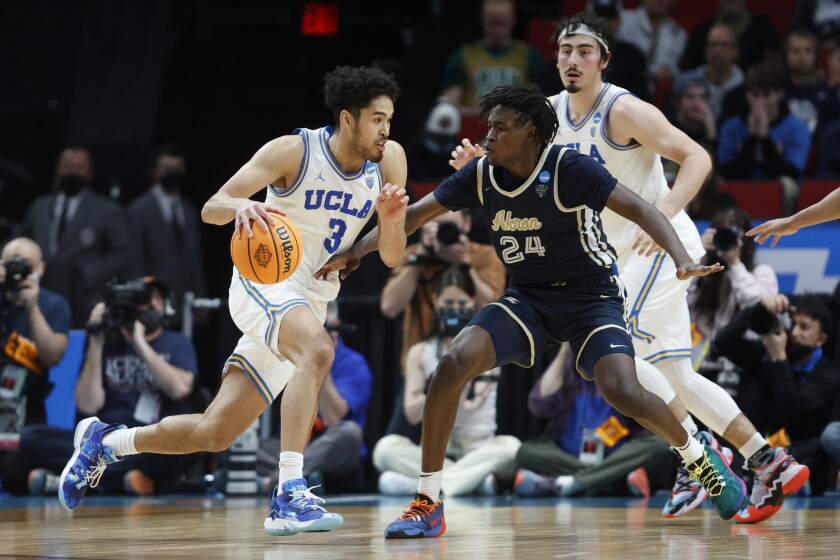 The Bruins were led offensively by Tyger Campbell, who had 16 points and five assists, and Jaime Jaquez Jr., who posted 15 points, six assists and nine rebounds against Akron. UCLA only had five bench points, all coming from Peyton Watson, even though the Bruins put in three other guys off the bench.

The Bruins will face off against fifth seeded Saint Mary’s on March 19th. The Gaels are a stellar team that beat Gonzaga this year already and had a good performance against an underrated Indiana squad in the first round. UCLA will have to rebound and score bench points if they expect to have a shot against St. Mary’s.