On Friday Auburn Basketball fell to Texas A&M in the SEC tournament. Auburn looked particularly flat in the first half and trailed by 16 at the start of the second half. They made a comeback from being down 20 midway through the second, but Texas A&M closed the game down towards the end. Auburn’s K.D. Johnson had 0 points and six rebounds in 26 minutes on the court. On the other side Tyrece Radford dropped 19 for A&M as the Aggies extended their winning streak to six. That streak includes wins at 25 Alabama and now Auburn in Tampa Bay.

Auburn, who was ranked number one in the country for most of the season, has now fallen to 3-3 in their last six games. The Tigers are fighting for a one seed in the NCAA tournament and this certainly won’t help them.

After leading in the first minutes of the game, Auburn trailed the entire rest of the game. They started the game 1-10 from the three point line and just looked very slow.

Walker Kessler played well but not well enough to allow the Tigers to steal a victory. He had 16 points, nine rebounds and two assists. The rest of the team played poorly apart from Jabari Smith who led the team with 17 points. 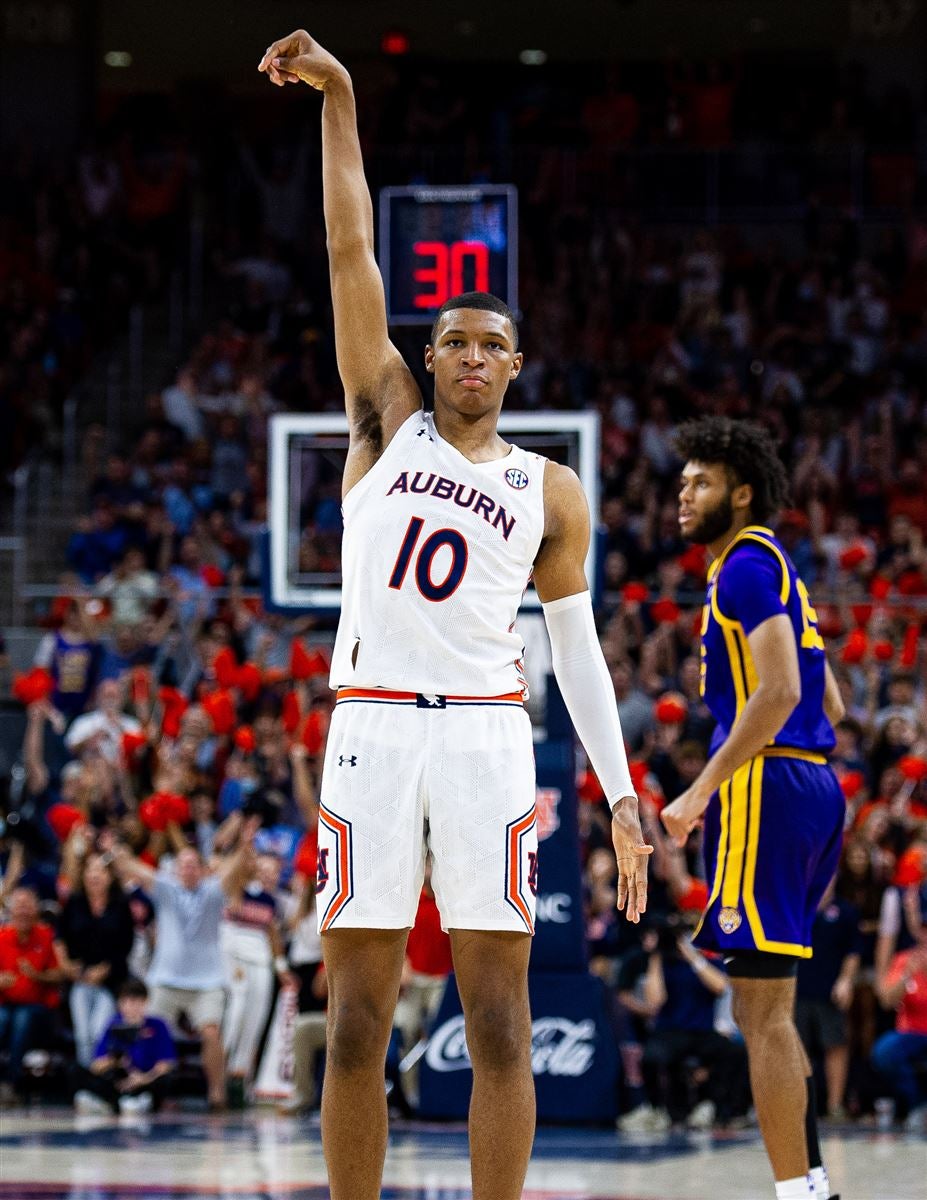 After taking a 16 point lead to end the first half, Texas A&M got off to an even hotter start in the second. With 11:16 remaining in the game the Aggies were up 53-33 over the Tigers and all hope looked lost.

The Tigers would start clawing their way back and by the time there was 40 seconds left on the clock Auburn had pulled within four. The Aggies Quenton Jackson had an incredible showing and posted an amazing chase down block in the final minutes of the game.

Texas A&M started off conference play on a 4-0 run before losing eight straight games. They’ve bounced back since then and have won seven of eight and are pushing for an at-large bid to the tournament. They also can earn a berth by beating the gauntlet of great teams in the SEC tournament.

Auburn now is eliminated from the SEC tournament and has to wait and hope that on Sunday they’ll still be given a one seed. They were ranked fourth in the country before this loss, and will most likely drop below Duke or Kansas depending on how the ACC and Big-12 tournaments go.

Auburn has been slumping badly over the past few weeks going 3-3 in their last six and five and four in their last nine. Their losses in that span are to Arkansas, Tennessee, Florida, and now Texas A&M. Those are good teams but if Auburn expects to make a run into the tournament, they can’t be dropping games like that.

Texas A&M will now play against Arkansas in the SEC Semi-final. The SEC tournament has been very interesting with Alabama and Auburn both losing in their first games. Now Vanderbilt and Mississippi State also have a chance to shake up the tournament if they can beat Tennessee and Kentucky respectively.

In my eyes the Aggies have earned an at large bid just by winning 7 of 8 to end the year in a very tough SEC. Tennessee, Kentucky, Arkansas, Auburn and Alabama have all been ranked throughout the year which is usually unheard of in the SEC for basketball.

In the end I believe Kentucky is one of the best teams in the country when fully healthy. We’ll see who can win it this weekend.