The last time these two teams faced off we got an amazing matchup. Miami started off strong but down the stretch Virginia Tech started to come back. Finally at the very end of the game, Charlie Moore hit a half court buzzer beater to steal the win for Miami.

Now VT will come into Watsco Center in Miami and try to ruin the Hurricanes Senior Day celebration. Seniors Kam Mcgusty, Charlie Moore, and Sam Waardenburg will attempt to secure the canes’ position in the ACC tournament with another win over the Hokies.

Hokies on a roll

Since losing to the Hurricanes at home, Virginia Tech has been scalding hot. The Hokies have won seven of eight, including a six game winning streak in that run. They’ve been led by Justin Mutts who is averaging 10 points, seven rebounds, three assists and a steal per game.

Keve Aluma is also helping the Hokies with his 15 points per game. Both Aluma and Mutts are shooting roughly 53% from the field.

The Hokies are nine and eight in conference play, putting them in seventh place in the conference. If they can rattle off a few more wins they could be in a good position in the acc tournament.

The Hurricanes senior day will honor their four seniors; Charlie Moore, Kam Mcgusty, Sam Waardenburg, and Rodney Miller Jr. Mcgusty, Wardeenburg, and Moore are all starters while Miller Jr. comes off of the bench.

These seniors have been essential to Miami’s productive season. Moore and Mcgusty are two of the teams three leading scorers, and Waardenburg has been an absolute force for the team on the inside.

Recently juniors Isaiah Wong and Anthony Walker have been playing exceptionally as well. I’ll be looking for a big game out of Walker on the glass.

I’ll also be looking at Charlie Moore to drop 20+ points for the fourth time this year. Moore is a great shooter and when he’s hot the Hurricanes win. 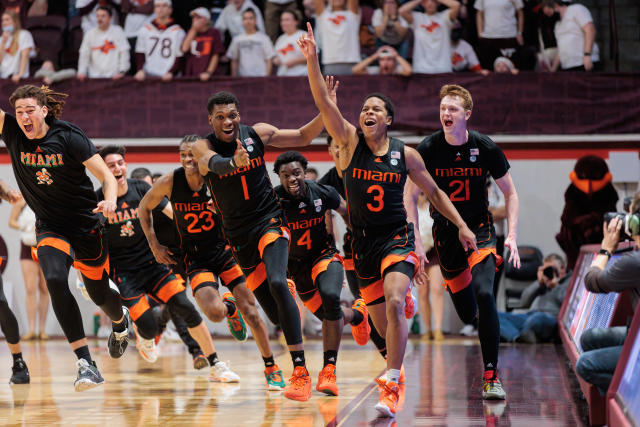 I’ll be looking at Miami to win the game here. They need this win more than Virginia Tech does and I expect a big crowd at Watsco center to help propel them to victory.

I also believe that Miami will cover the spread. I don’t see this game being as close as the last one despite Virginia Tech’s recent record. I expect the Canes to run away with this one.