During  First 3 Weeks Of Sports Betting 27,000 Oregonians Signed Up For SportsBoard

In only the first three weeks of sports betting in Oregon more than 27,000 people signed up for Oregon SportsBoard, which is the only sports betting app in the state. The number of players that signed up exceeded the state goal of 27,000, the exact number of players that signed up this far, is not currently known. Senior Public Affairs officer, Chuck Baumann said that the state is very pleased about the number of people that have signed up to use Sportsboard. He said the numbers are very encouraging, and since the app launched, it produces new customers hourly.

Although Oregon lottery officials are cautiously optimistic about the future, the numbers have been lower than other like markets. Oregon was the 12 state out of the 13 states that have introduced legalized sports betting into their states. These new sports betting laws, commenced after a May 2018 Supreme Court decision ended the ban on sports betting.

The $17 Million Handle Was Better Than Four Other State Totals

Although the $17 million in November sports wagers in Oregon, it did do better than four other states. The amount topped, Pennsylvania, Rhode Island, Delaware and West Virginia. The number is better some say because those other four states did not have online sports betting during their first full month of operation. The Oregon handle was far below, Indiana that had $91 million or Iowa that had $38 million, both of those states had sports betting online access in the last few months.

In Oregon, basketball had the most wagers, behind football. Which is normally the state that sees the most betting action. Oregon has the NBA team of Portland Trail Blazers, and the MLS team of Portland Timbers. Oregon was one of the first states to offer sports betting after the ban ended. They do have some restrictions, one being no betting on college sports games. Oregon has nine Native American owned casinos, where legal sports betting takes place. 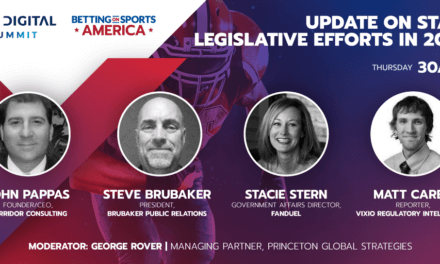 SBC Digital Summit Led off by US Regulatory Update Session