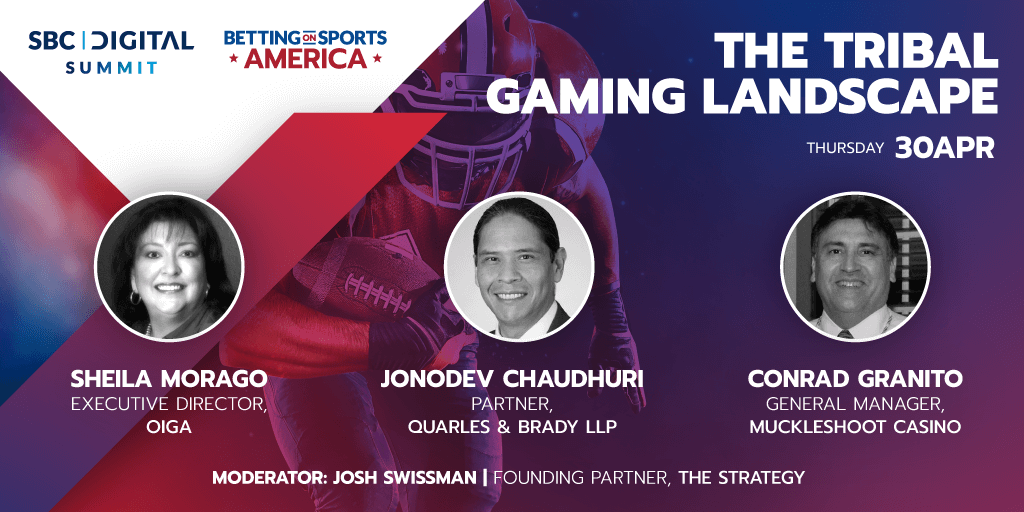 Organizers of the gaming industry’s largest virtual conference, the SBC Digital Summit, announced a 5-star roster of speakers to address the Tribal gaming landscape at the upcoming event schedule for April 27- May 1.

The session is part of the Betting on Sports America track, one of seven content programs. Other tracks are focused on Leadership in Betting, Leadership in Gaming, the Latin American market, lotteries, payments, and digital marketing. The virtual event will take place during the dates originally scheduled for the Betting on Sports America conference, the largest dedicated sports betting trade show in the world now slated to be held at the Meadowlands Exposition Center in New Jersey on December 1-3, 2020.

The shift to a virtual event will be complete with five days of conference sessions, virtual networking facilities, and even a complete exhibition and trade show floor in a digital format with state-of-the-art connection possibilities. The groundbreaking format will allow SBC to bring together the gaming industry and address issues facing it in the current climate.

While all sectors of the gaming industry are reeling due to the Covid-19 pandemic, the case can be made that Tribal operators are at the top of that list. The Tribal Gaming Landscape will be the subject of a panel discussion at the upcoming SBC Digital Summit, featuring leaders and executives from this important sector of the U.S. industry.

Since serving as Chairman of the NIGC, longtime attorney Chaudhuri feels the federal government has failed Tribal Nations once again by not including them for assistance in the recently passed aid packages in the U.S. Congress.

Chaudhuri said: “Excluding Tribal gaming operators in this package is a massive failure of the federal government. We are working hard to remedy the situation but once again Native Americans have been overlooked.

“The more attention we can bring to this issue via sessions like this at the SBC Digital Summit, the better.”

In 2013, President Barack Obama designated Chaudhuri to serve as acting Chairman of the NIGC. During his tenure as NIGC Chairman, Chaudhuri oversaw the $32.4B Indian gaming industry, comprising approximately 500 gaming facilities, operated by 244 Tribal nations across 29 states. While at the Commission, he provided guidance on a wide range of national policy issues including Indian gaming, economic development, energy, Alaskan affairs, and Tribal recognition.

In his role, Granito is leading a multi-million dollar transformation of the local casino into an anticipated four-star destination resort. The expansion and repositioning of Muckleshoot Casino is due to the unprecedented growth and profitability achieved over the last five years as well as the demands of an expanding market. Granito has more than 30 years of experience in developing strong economic foundations for Tribal Nations around the country.

Conrad Granito said: “These are trying times for all of humanity and Tribal gaming isn’t immune to this. When a Tribal gaming facility closes, its effects are felt far beyond the boardroom or its shareholders. Entire Tribal communities rely on the revenue from these facilities and without that source of revenue essential Tribal community programs are no longer available.

“Tribal Nations have faced even greater challenges in the past and have not only met them but have become stronger. This time will not be any different. The SBC Digital Summit is another avenue for the industry to come together and discuss these issues and what our industry could look like when all of this is behind us.”

Before the pandemic hit, Tribal gaming operators in Oklahoma were embroiled in a legal battle with the state’s governor over the renewal of the state’s compact. As chairman of OIGA, Morago now finds herself battling for her membership on a completely different front.

Sheila Morago said: “In Oklahoma and around the United States, the treatment of sovereign and Tribal nations by the federal government regarding pandemic aid has only added another dimension to the unprecedented challenges our Tribal leadership is dealing with now.

“There are many unknowns facing the overall industry right now. One certainty amid the chaos: if Tribal nations continue to be overlooked, there will be tragic and lasting implications for generations to come. I’m eager to have more discussion around this at the SBC Digital Summit.”

The SBC Digital Summit is expected to draw 10,000 participants, 300 operator companies, and 140 speakers in what will easily be the world’s largest virtual event for the betting and gaming industry.

The thousands of delegates logging in from around the world can also take in a virtual exhibition featuring the latest offerings from the betting and gaming industry’s most innovative suppliers, attend the numerous product demos and special webinars at the exhibition booths, and make valuable new contacts in the virtual networking lounges.