As Sports Betting Continues To Flourish It Faces Some Testing In 2020. According to new reporting in ‘The New York Times’ sports betting is ripe for some change and more expansions in 2020. Very recently at a Rhode Island casino, the line for customers who were making legal sports wagers, circled around the building. Some players were in line to get their money from previous placed bets on the New England Patriots. There were others that were in line to place a new sports bet for that night.

According to the general manager of the Twin River Casino, Craig Sculos, ‘these lines are very normal for a Monday night,’ Sculos says cheerfully that it’s been the norm since Rhode Island offered it’s residents legalized sports betting earlier in the year. The casino has had to hire extra personnel to man the booths and cages on Monday nights. Rhode Island is the only state in the New England region that offers legalized sports betting. Therefore it’s the only state for the New England Patriots fans to  place their bets.

What fans and advocates of legalized sports betting can look forward to in 2020, is some debates in states where the measures thus far has failed. Some states that already have legalized sports betting measures on the schedule are, Connecticut, Massachusetts, Ohio and Missouri. Sponsors of sports betting bills in those states have been crafting their bills so they have a better shot at passing in 2020. Senator Brandon Beach of Georgia has been lobbying hard for the sports betting to pass, and help bring prosperity to the state.

He has targeted on horse racing, his bill lists most sports to be included in the law. He and other advocates of legalized sports betting have been engrossed in meetings that they say will help introduce a new and improved bill. Georgia does not have any legalized sports betting, the only legal gambling they have is the lottery. The measure has strong opposition, including opposition by the ultra-conservative group, ‘Faith & Freedom Coalition based in Georgia. 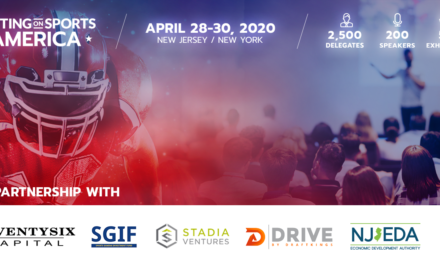 Startups to vie for $100,000 ‘First Pitch’ prize at Betting on Sports America