Baseball Hall of Famer, Tommy Lasorda passed away on January 7, 2021, at the age of 93. Lasorda, who was born on September 22, 1927, competed in the MLB as a player and managed the Los Angeles Dodgers in his storied baseball career. He brought two World Series Championships back to Dodger Stadium in 20 years managing the club.

The news of Lasorda’s passing was heartbreaking to baseball fans all over the world. You would never hear any bad comments about Lasorda in his time as a player, manager, or fan. Lasorda was truly one of the most genuine leaders in the game of baseball.

In honor of the life of Tommy Lasorda, I wanted to take a stroll down memory lane and look at his baseball career.

Tommy Lasorda was born and raised in Norristown, Pennsylvania. He was brought up by devout Catholic parents, who had five sons together. Lasorda was the second oldest child in the family. Following his high school years, Lasorda signed with the Philadelphia Phillies as an undrafted free agent.

His first minor league home in the Phillies organization was in North Carolina with the Concord Weavers. Lasorda served in the United States Army following his first professional season, which caused him to miss the 1946 and 1947 seasons.

In 1948, Lasorda was back on a professional pitcher’s mound with the Schenectady Blue Jays. He was traded to the Dodgers organization from the Phillies in 1949. Lasorda bounced around between the Dodgers, Athletics, and Yankees.

He appeared in the big leagues for the Dodgers and Athletics. His collective MLB pitching record was 0-4 with a 6.48 ERA and 37 strikeouts. Lasorda didn’t have a stellar playing career, but his coaching career didn’t follow this same trajectory.

Lasorda is one of the best MLB managers of all time.

He preached this message in his time as a coach.

Tommy Lasorda made it happen for the Dodgers.

Lasorda began his coaching career as a scout for the Dodgers in 1960. He worked his way up through the ranks and became a minor league manager in the Dodgers organization. He had this role for seven years before he became the Dodgers’ third-base coach.

Lasorda was on third base for the Dodgers from 1973 until 1976. He was offered managerial positions around the league, but he stayed loyal to the Dodgers organization working under Hall of Fame manager Walter Alston.

Lasorda took over the managing duties for the Dodgers at the end of the 1976 season when Alston retired. His first full season at the helm was in 1977. The Dodgers organization would never be the same after Lasorda took control.

Lasorda managed the team for four games in 1976 and then full time from 1977 through 1996. His collective record as a manager was 1,599-1,439 which totaled a winning percentage of .526. He led the franchise to eight division titles, four National League Pennants, and two World Series Championships in his twenty years leading the Dodgers. 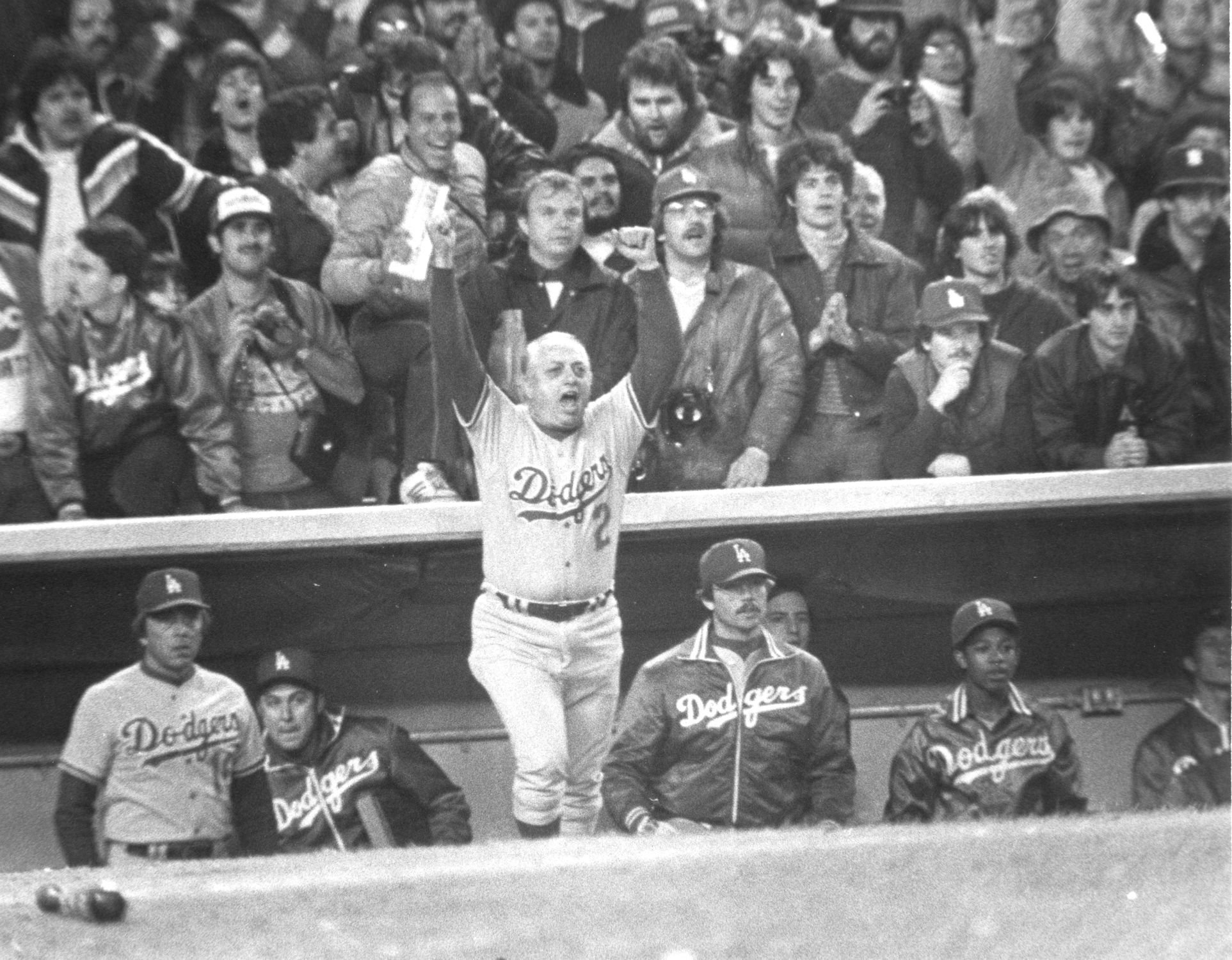 He has managed the fourth most postseason games of all time at 61. He is the 22nd winningest MLB coach of all time. His records in 1983 and 1988 earned him the National League Manager of the Year Award.

Lasorda didn’t just win in the MLB. He also won on the world stage as a manager. He led the United States to the gold medal in the 2000 Summer Olympics which took place in Sydney, Australia. This victory came over Cuba who had won back-to-back golds in the prior two Summer Olympic Games.

When Lasorda stepped down from his managerial role, he was given some behind-the-scenes positions in the organization including Senior Vice President and Special Advisor to the Chairman.

Lasorda had an impact on the Dodgers through the 2020 season. Lasorda was at every Dodgers’ home game for years and he had a very special relationship with the players on last year’s championship team.

It’s extremely fitting that the Dodgers won their first title since Lasorda had managed the team in his final season on this Earth. Lasorda did so much for the Dodgers organization and the greater Los Angeles community. His presence will be missed inside Dodger Stadium this coming spring.

He may not be sitting behind home plate, but his presence will be felt forever.

“I bleed Dodger blue and when I die, I’m going to the big Dodger in the sky.”  – Tommy Lasorda