Alex Caruso, nicknamed the “Bald Mamba” for his loveability and breakout playmaking, is now a top-five power forward in the National Basketball Association. The craziest part about it? He has only played there for two games.

Who is Alex Caruso?

The College Station, Texas native first hit the professional scene after going undrafted out of Texas A&M, a school where he spent four years and averaged 8.0 points, 4.7 assists, and 2.0 steals per game.

The Lakers’ soon-to-be fan-favorite announced his arrival to 18,997 fans at Staples Center on April 4, 2019, by viciously slamming a put-back dunk over the heads of Kevin Durant and Klay Thompson following a three-point miss from teammate Rajon Rondo.

From there, the trajectory of the former Aggie’s career skyrocketed, first by signing a guaranteed deal with the LA Lakers, and ultimately starting the closeout game of the 2020 NBA Finals against the Miami Heat.

Although “AC Fresh,” another nickname of Caruso’s, has relayed that he wanted to stay on the West Coast, this summer’s contract negotiations did not work out, and he eventually signed a four-year deal with the Chicago Bulls, seemingly to serve as Lonzo Ball’s backup at point guard.

Head Coach Billy Donovan and the Bulls had other ideas, however.

Fans on social media received quite the shake-up Saturday afternoon when the Chicago Bulls announced that they would be giving Caruso his first start with the team at power forward.

At just 6-foot-5, 186 pounds, Caruso has been nothing other than a pass-first guard for his whole career. 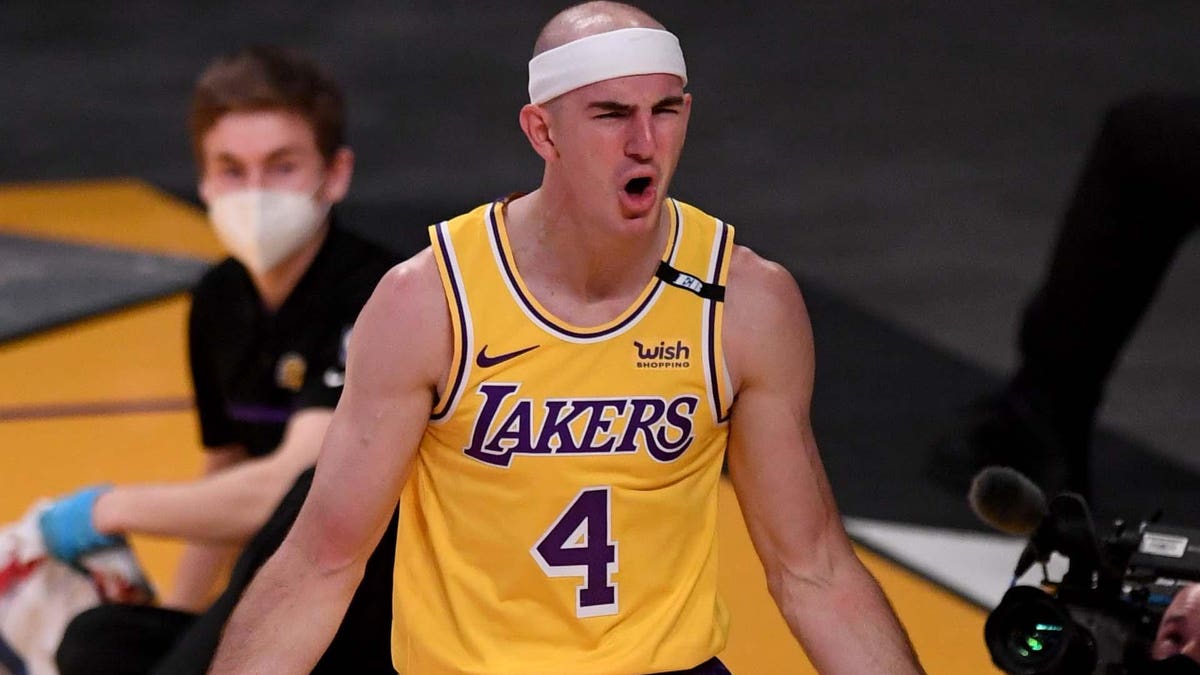 Given that Lonzo Ball, Zach LaVine, and DeMar DeRozan were guaranteed to also be in the starting five, it seemed as if there was no space for Caruso in the opening lineup— thus, there were many skeptics of Billy Donovan’s decision.

About three hours later, however, the verdict had completely flipped; Caruso finished with a game-high +16 in +/-, meaning that the Bulls outscored their opponent, the Los Angeles Clippers, by 16 points.

Chicago ended up winning the game 100-90, snapping the Clippers’ seven-game win streak and vindicating Caruso’s promotion to the first string.

Caruso’s performance was short-lived, however, as the Bulls had to navigate a back-to-back that concluded with a primetime duel with the Lakers the next night— once, again, Caruso started at power forward, and once again, he shone.

Despite only taking one shot in the entire game— which he missed— the former member of the purple and gold helped lead a 121-103 victory over his former squad, finishing with a game-high +28, along with six rebounds, five assists, and two steals.

He is also tied for second in steals per game with 2.5 and has played fewer minutes than the leader, Chris Paul, and the two tied with him, Marcus Smart and Gary Trent Jr.

Caruso has been viewed as a winning player around the league for the past few years, especially when he was sharing the court with LeBron James in LA.

To many, seeing a young, undrafted, gangly looking guy paired with the “King” looked awkward, but their production was undeniable; this is a major part of what made him so valuable on the open market and eventually contributed to him being picked up by the Bulls.

Last year, Chicago finished with the 11th-best record in the Eastern Conference at 31-41; this year, the new-look Bulls, featuring Caruso, are 10-4, a half-game away from leading the East, and on pace to finish with 59 wins.

If this pace continues, it would be the franchise’s best season since 2010-11 when they reached the Conference Finals and Derrick Rose won the league’s Most Valuable Player award.

All of Ball, LaVine, and DeRozan have great chances at making the All-Star team— not to mention two-time All-Star Nikola Vucevic, who is currently navigating the NBA’s COVID protocols— but Caruso just might be the standout player on the roster.

He is no threat to score 30 points, and he will not demand the ball, but when Alex Michael Caruso is on the court, his teams win games— and that is more valuable than any non-Kevin Durant, Giannis Antetokounmpo or Anthony Davis can offer at power forward.