That is the number of days it has been since the Detroit Pistons last won an NBA playoff game. That was May 24, 2008, if you were wondering. And here is the box score of the contest, in which Antonio McDyess scored a game-high 21 points.

At the time of the win, there was not yet a Stan Lee day. Michael Jackson (RIP) was still alive. The first iPhone wasn’t 12 months old. Slovakia was not using the Euro, and Bitcoin was not yet created.

The reason for all of this is that it has been a long time for the Detroit Pistons. They have been irrelevant for the better part of 13 years. They have had a number of big free-agent signings that turned into duds. They have drafted poorly. But finally, they won the lottery. It was the first time since 1970, when Detroit took Bob Lanier, that they had the top pick.

And Cade Cunningham may just be the guy who can help lead the team to end this drought within the next few years. Let’s look back at that last victory in the postseason, though.

During the 2008-09 season, the Pistons had Allen Iverson on their roster. And he made them a fun team to watch, despite the fact that they finished at 39-43. Michael Curry was the coach, his first time being a head coach. They would get swept by LeBron’s Cavs in the first round. And Curry would be fired.

Seven years later, Detroit returned to the playoffs. With Stan Van Gundy at the helm and a fiery young squad, they went 44-38 in 2015-16, awaiting Cleveland again. Alas, things went the same. Stanley Johnson, a rookie, called himself a “LeBron stopper” and got cooked every night. They were swept.

They most recently made the playoffs in 2018-19, led by Blake Griffin. He had a magnificent year and put the team on the map. They finished at 41-41, in Dwane Casey’s first year leading them. Unfortunately, though, they had to face the league MVP in Giannis Antetokounmpo. The Bucks dominated the series, and so it marked 14 straight playoff losses for the franchise. 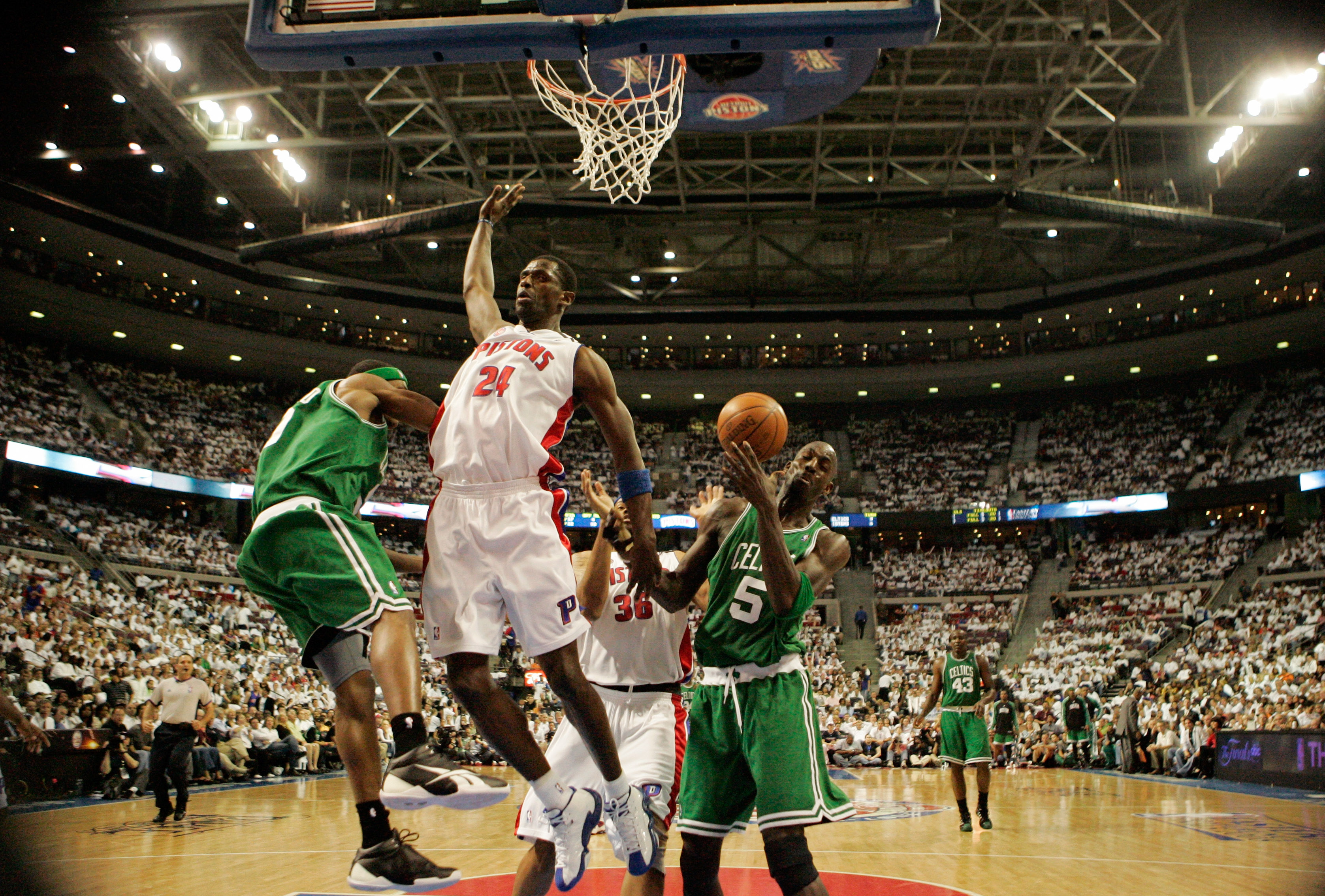 It’s been 4,829 days since the Detroit Pistons last won an NBA playoff game on May 24, 2008, against the Boston Celtics in the Eastern Conference Finals. Antonio McDyess scored a game-high 21 points.

4,829 days ago, the Pistons defeated the Celtics 94-75 on their home court to tie the Eastern Conference Finals 2-2. This was significant because it was the first season of Boston’s big 3. Ray Allen, Kevin Garnett, and Paul Pierce were trying to get their team to the Finals right away.

Played in a time where the three-point shot was not a critical aspect to winning yet, Detroit shot 2-9 and Boston just 1-9 from beyond the arc. Chauncey Billups and Jarvis Hayes each made one for the home team. And for Boston, James Posey had the one basket.

The way Detroit came away with a win was with tremendous defense. They forced 14 turnovers and held their opponents to just 31.8% shooting. They stole the ball seven times and had 10 blocked shots. Rasheed “Ball Don’t Lie” Wallace had five of the 10 rejections, while Billups and Tayshaun Prince each had two steals.

Boston lost despite getting to the FT line 39 times. They made 32 of the attempts, good for 82.1%. And for the Pistons, they went 20-26 at the charity stripe. Making 20 foul shots usually means you have more than your opponent. But, not in this particular game.

McDyess had one of his best games since his prime years with a 21-point, 16-rebound effort. He was also a +18 during his 34:06 on the court. Equally impressive was Jason Maxiell pouring in 14 off the bench, shooting 6-6 in his 20 minutes of action.

The Celtics would go on to win the next two games of the series and defeat Kobe’s Lakers in the NBA Finals. But for this one day, Detroit could celebrate.

It’s been a long time since they claimed any sort of playoff victory. And as mentioned in the prior section of this article, they have now lost 14 straight postseason contests.

They’ll win one eventually. Right? Right? Anybody? Yes? No? Oh, wait, my phone is buzzing. I am being reminded that Cade Cunningham could be the guy to get them over this hump, along with the talented young supporting cast.

Detroit will *probably* miss the playoffs in 2021-22. They will use the year to build camaraderie among all of their young talent. And so, they will come back in 2022-23. They will qualify for the play-in tournament. And they’ll find their way into the top eight when all is said and done.

They’ll be playing a juggernaut team in the opening round, but they will have a game on their home floor. And that is when it will happen.

THANK YOU FOR READING

Well, you’ve made it to the end! Thank you for reading. I’ve been enjoying putting these Flashback Friday pieces together in recent weeks as a nice form of reminiscing.
I hope that the nostalgia you were craving could be met by reading this. Plenty more to come. I’m just getting started.