What looks like the end of the Rudy Gobert era in Utah, could make up to be an even more interesting offseason. Now there are a handful of teams in the Gobert sweepstakes, but only a few of those teams make sense from a financial and timeline point of view. Ever since coach Nick Nurse took over in 2018, the Raptors have been predicated on defense. Luckily for them, when you look up the definition of “defense” in the dictionary, Gobert’s face is right there.

Gobert would provide them a defensive anchor that the Raptors have been missing since they won the championship in 2019. He has the length that seems to be a requirement to play for the Raptors but the one issue would be the spacing that he brings.

Almost every big that the Raptors have had since 2018 has been able to space the floor with their shooting. Gobert brings vertical spacing, but it remains to be seen how he would affect the flow of the Raptors’ offense.

Giving up Anunoby and Trent would also affect the Raptors’ spacing, maybe even too much. The pair provided Toronto with a bulk of its most consistent shooting from three, while their perimeter defense was also vital. At just 24 years old, Anunoby has made major strides offensively and it may be hard for Raptors president Masai Ujiri to part with Anunoby’s two-way versatility.

Trent has also turned himself into a valuable wing piece, averaging 18 points while shooting 38% from three. He’s only 23 years old and would be a nice piece for the Jazz if they head towards a rebuild.

With Pascal Siakam, Fred VanVleet and Rookie of the Year Scottie Barnes still on the roster, Ujiri could be inclined to swing for the fences and trade for Gobert. The Warriors are playing in the NBA Finals this year, but they’ve still had an issue with finding a center that provides consistent minutes. The Warriors drafted James Wiseman with the second pick in last year’s draft with the hopes that he would be that guy, but injuries have derailed him so far. Kevon Looney has provided the Warriors serviceable minutes, but a Gobert and Draymond Green pairing has the chance to be one of the most disruptive defensive duos in NBA history.

Gobert’s impact offensively would also be a huge win for how the Warriors conduct their offense. With so many on-and-off ball screens, Gobert would help an offense that relies on getting shooters open. It would also provide another lob threat for Stephen Curry and Green when defenders decide to help off of Gobert.

Another interesting piece in this trade would be seeing how coach Steve Kerr plans to use Gobert in the playoffs so he doesn’t run the risk of having to sit the three-time Defensive Player of the Year award winner.

We’ve seen in past playoff matchups, like with the Los Angeles Clippers a year ago where that was the case. However, this year against the Dallas Mavericks in the first round is not completely on Gobert.

Utah’s guards were porous defensively and provided no aid for Gobert, who was expected to be the main deterrent at the rim while also being asked to cover the Mavericks’ shooters in the corners. Gobert has great size, but there aren’t many, if any players that can consistently cover that ground.

It’s also important to mention that trading Andrew Wiggins would have an effect on the Warriors perimeter defense. Wiggins’ size and versatility has been a huge asset for the Warriors this season. He’s been one of the Warriors’ best perimeter defenders with Klay Thompson taking a step back defensively after suffering a torn ACL and Achilles in consecutive years. 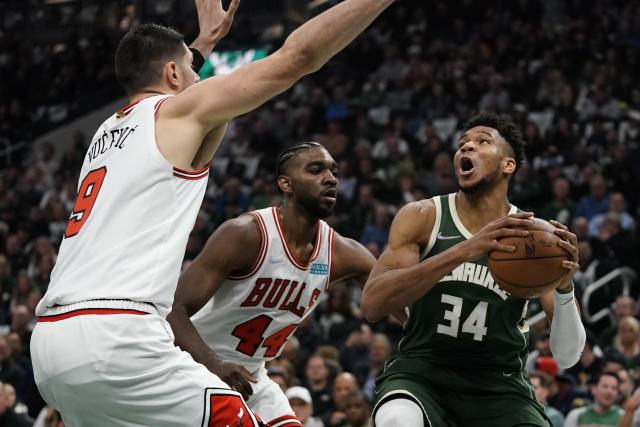 (L-R) Nikola Vucevic and Patrick Williams of the Chicago Bulls contest a shot.

The Bulls’ defense went from top of the league to the bottom of the barrel when guards Alex Caruso and Lonzo Ball went down with injury. Now Gobert would not solve all their defensive issues, but with Ball’s knee injury that seems to be getting progressively worse, the Bulls won’t be able to rely on their backcourt defense as much.

Gobert doesn’t come without his faults however. Outside of being a lob threat, Gobert’s limitations on offense are quite large. He certainly helps in pick-and-roll situations and is one of the best screeners in the league, but with a limited arsenal on offense, it makes it easier for teams to guess where he’s going to be.

Also, it would be remiss to not mention what Chicago would have to give up in this scenario.

Nikola Vučević has a $24 million dollar expiring contract which makes up most of the money, but Utah also needs a younger asset. As a result, the most likely candidate would be Patrick Williams.

Williams fell victim to an unorthodox rookie year in 2020-2021 and then his sophomore year was cut short after a wrist injury caused him to miss 65 games. He’s had promising moments in his two years in the league, but has also shown to be passive on the offensive end at times.

The loss of Vučević could also have major ramifications for the Bulls offensively. Opponents have to respect Vučević outside of the paint, to a varying degree. This would undoubtedly put more pressure on guards Zach LaVine and DeMar DeRozan to initiate the offense, which could lead to a more predictable offense.

In the end, DeRozan turns 33 years old this summer and isn’t getting any younger, so it’s up to Chicago Bulls’ vice president of basketball operations Artūras Karnišovas to determine if this move puts the Bulls in the next category of contenders.