This game is enticing. On one side, you have the 5-1 Buccaneers who have been in a nice groove as of late. Tom Brady is looking like the 2017 Brady that took home the MVP. So far this season, the veteran signal-caller is leading the league in yards per game at 344.0, throwing for a ton of touchdowns, and has only turned the ball over three times, a testament to his greatness.

As for the Bears, their recipe for success is establishing the run game. Although that feat has proved to be tougher as of late, considering the loss of starting running back David Montgomery, rookie Khalil Herbert has picked up nicely.

Last week the young running back compiled 97 yards and a touchdown on 16 carries against a good Packers’ run defense.

Bears vs Buccaneers Matchup at a Glance

list the spread, Moneyline, and total (at PointsBet | at Caesars | at DraftKings | at Fanduel | at BetRivers) 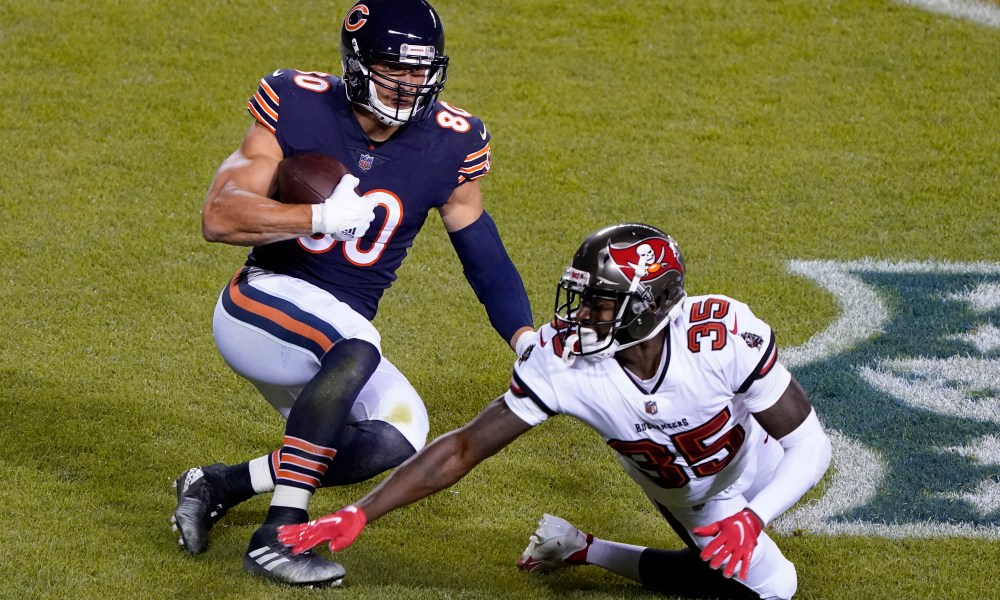 Bears Preview: All paws on the ground

The Bears are so much better when their run game is working on all cylinders. Against the Bucs defense, though, this may be tough. This season the Tampa Bay run defense has been unanimously the best in the league. They have only allowed 3.5 YPC (2nd) and 54.8 YPG (1st). Here is where things get interesting, though.

Last week they showed a little gap in their armor, and the Bears will have to expose it even more. They were pretty vulnerable to Jalen Hurts and the Phili rush attack last week, and having the mobile quarterback might have been the key. Against Boston Scott, Miles Sanders, and Jalen Hurts, they allowed 100 yards on 19 carries and two touchdowns.

It will be up to Justin Fields to expose that in this one.

Buccaneers Preview: Next man up

The Tampa Bay Buccaneers reserves have to really step up this week. Their secondary has been decimated by injuries this season and losing Richard Sherman against Phillidelphia didn’t help.

So far this season, their pass defense has been middle of the pack. They have allowed a 96.6 QBR to oppose quarterbacks and rank in the bottom five when it comes to YPG, which they will have to be wary of this week.

Regardless of that, this pass rush is still lethal. Last week, they got back to their ways, compiling two sacks and seven quarterback hits against the elusive Hurts.

This spread is big, a little too big, in my opinion. The Bears are coming off a good game last week in which they took the Packers right down to the wire but ultimately folded under pressure. Then Rodgers did his whole “I own you” thing.

And the Buccaneers, although they got things done against Phillidelphia last week, showed that there are a couple of problems with this team despite their 5-1 record. But then again, Tom Brady is their quarterback, and there is nobody more trustworthy to turn this pirate ship around.

Use the prop finder below to find all available offerings for this Bears vs Buccaneers game. You can also search for any player to see the props available for an individual.