As the seventh week of the National Football League comes to a conclusion, teams look to review Week 7 game footage, improve, and get ready for the following week.

On Sunday, October 31st, at 1:00 PM ET, the Buffalo Bills will host the Miami Dolphins for an exciting Week 8 matchup in Highmark Stadium in Orchard Park, New York. The Bills are coming off a nail-biting Week 6 loss against the Tennessee Titans.

On the other hand, the Miami Dolphins are coming off of a close loss against the Atlanta Falcons. Both teams look to succeed in Week 8 and turn their losses around.

Bills vs Dolphins Matchup at a Glance

Through just 6 games, Josh Allen, the quarterback of the Buffalo Bills, has thrown for 1723 yards, 15 touchdowns, and only 3 interceptions.

Currently, Josh Allen is 15th in the league in passing yards but that is because he has had a bye week already. He leads quarterbacks like Aaron Rodgers, Matt Ryan, and Carson Wentz, quarterbacks who have played a total of 7 games already.

Not only is Josh Allen thriving, but the entire offense and defense is playing at a very high level. The Bills defense is currently ranked first in the entire league in yards allowed.

Though they have only played 6 games, the 2nd ranked Saints have also only played 6 and the 3rd ranked Cardinals have 600 more yards allowed. The Bills have allowed only 1621 yards in total.

If both the offense and defense can continue playing at this high of a level, the Bills are an unstoppable force in the East and on Sunday against the Miami Dolphins. 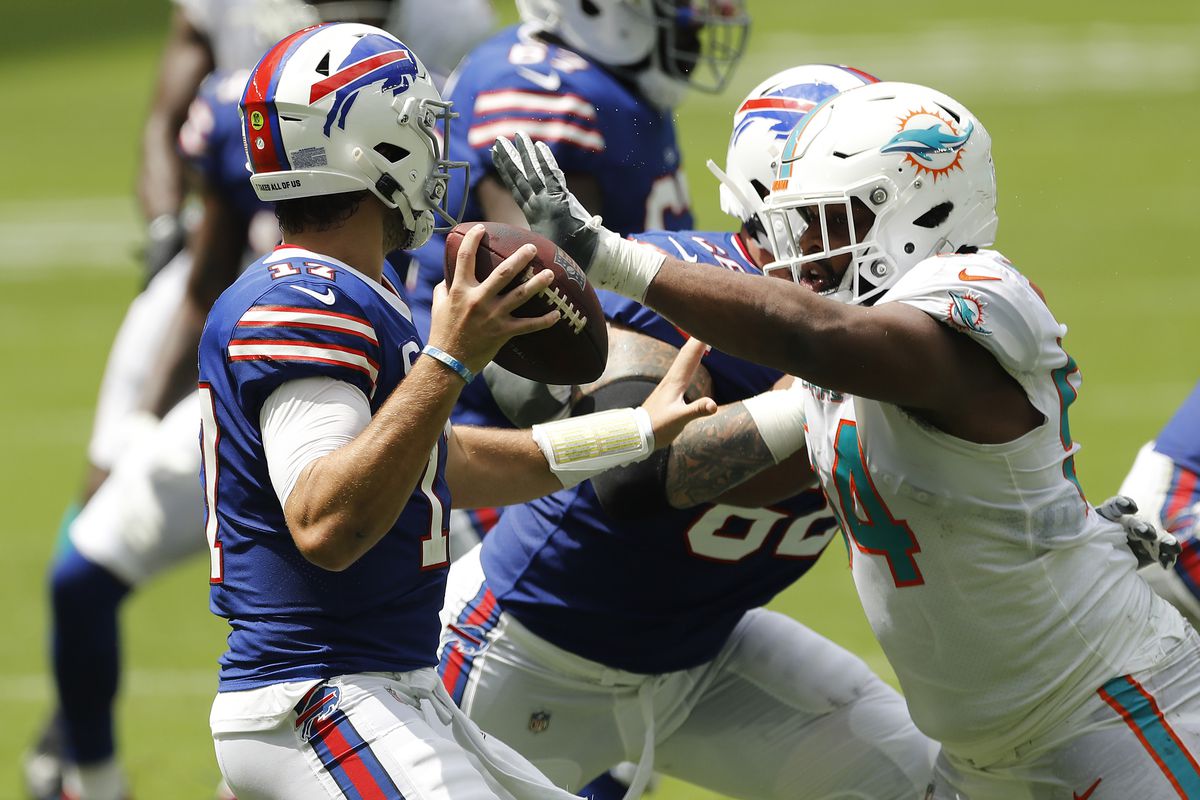 Over the past 5 weeks, the Dolphins have lost 5 straight matches. 3 of those 5 games against the Raiders, Falcons, and Jaguars have been losses by 3 or fewer points. I think the major concern for the Dolphins is their defense.

Currently, the Dolphins are dead-last in defensive rankings as they have allowed the most yards this NFL season. The Dolphins have allowed offenses to obtain 2904 total yards.

On the other side of the ball, the offense must find ways to close out games. Whether it be in the red zone and scoring touchdowns and not settling for field goals or whether it be burning the clock more, the Dolphins must work to win these close matches.

If the defense is not doing its job, the offense must find a way to carry the burden. Tua must step up and play like the franchise quarterback he is.

The current spread is at 14, favoring the Buffalo Bills. Personally, I believe the Bills run away with it. Josh Allen should be able to produce many touchdowns and their secondary will hold the Tua Tagovailoa and the Dolphins offense to few points.

In terms of the MoneyLine, again I believe the Bills are a definite lock.