Phase two of the New England Patriots revenge tour is complete following the NFL Draft. Watching Tom Brady depart to Tampa Bay to win another ring did something to Bill Belichick and the entire New England organization.

The Patriots made a significant splash in free agency, acquiring some huge signings like Nelson Agholor, Hunter Henry, and Ted Karras. With the draft completed, the 2021 roster that will enter training camp in the summer is nearly set.

There are eight rookies that the franchise drafted who will be competing at camp for a starting job or a roster spot. There were some surprises with New England’s draft strategy, but the front office and coaching staff were very efficient with their picks.

Here are the eight players selected by the Patriots.

The biggest question that the Patriots needed to address in the offseason was their franchise quarterback. Cam Newton was far from stellar in 2021, but he did not have many weapons to work with on offense.

Bill Belichick has already announced that Newton will be the starting quarterback when the season opens, but Mac Jones is the franchise’s future. 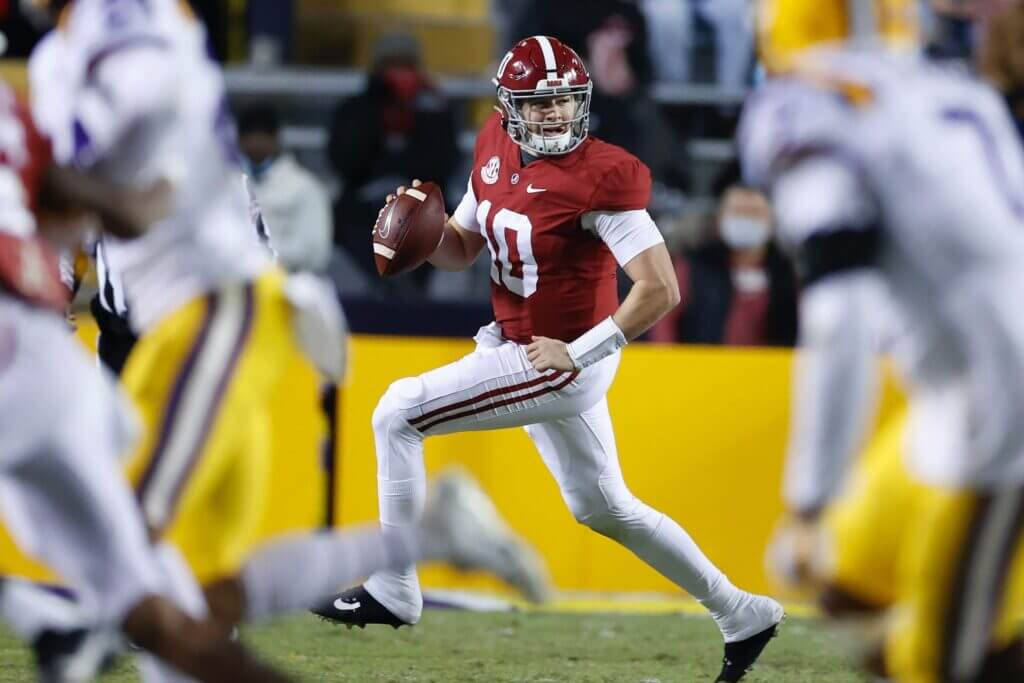 On draft night, everything fell into place for the Patriots in the first round. The rumor was that they would have to trade up to select a quarterback, but Jones fell into Belichick’s lap at the 15th overall position.

The Patriots are getting a proven leader in Jones. He may not have the best arm strength, but his technical ability in the pocket is what makes him unique. When you watch tape on Jones, it will be tough for you to find his feet out of position.

In 2020, he completed 77.4% of his passes for 4,500 yards and 41 touchdowns. Jones will not make plays with his legs, but he is smart enough to realize that it’s better to punt than force the football.

Christian Barmore is my pick to be the biggest surprise in training camp. New England expects to get production out of Barmore in 2021, but I think he will be a leader on the defensive line by the end of the year.

Barmore’s athleticism and explosiveness are elite. When his speed off the ball is combined with his ability to stun offensive linemen with leverage, he is tough to contain.

Barmore capped off his final collegiate season by being named the Defensive MVP of the National Championship Game after recording five tackles and a sack.

The defensive tackle is occasionally overpowered in the interior. He dropped to day two because of his inconsistency on tape, but Barmore’s ceiling is through the roof.

The Patriots focused on defense in the early rounds after they grabbed Jones 15th overall. New England stabilized the EDGE with Ronnie Perkins out of Oklahoma. 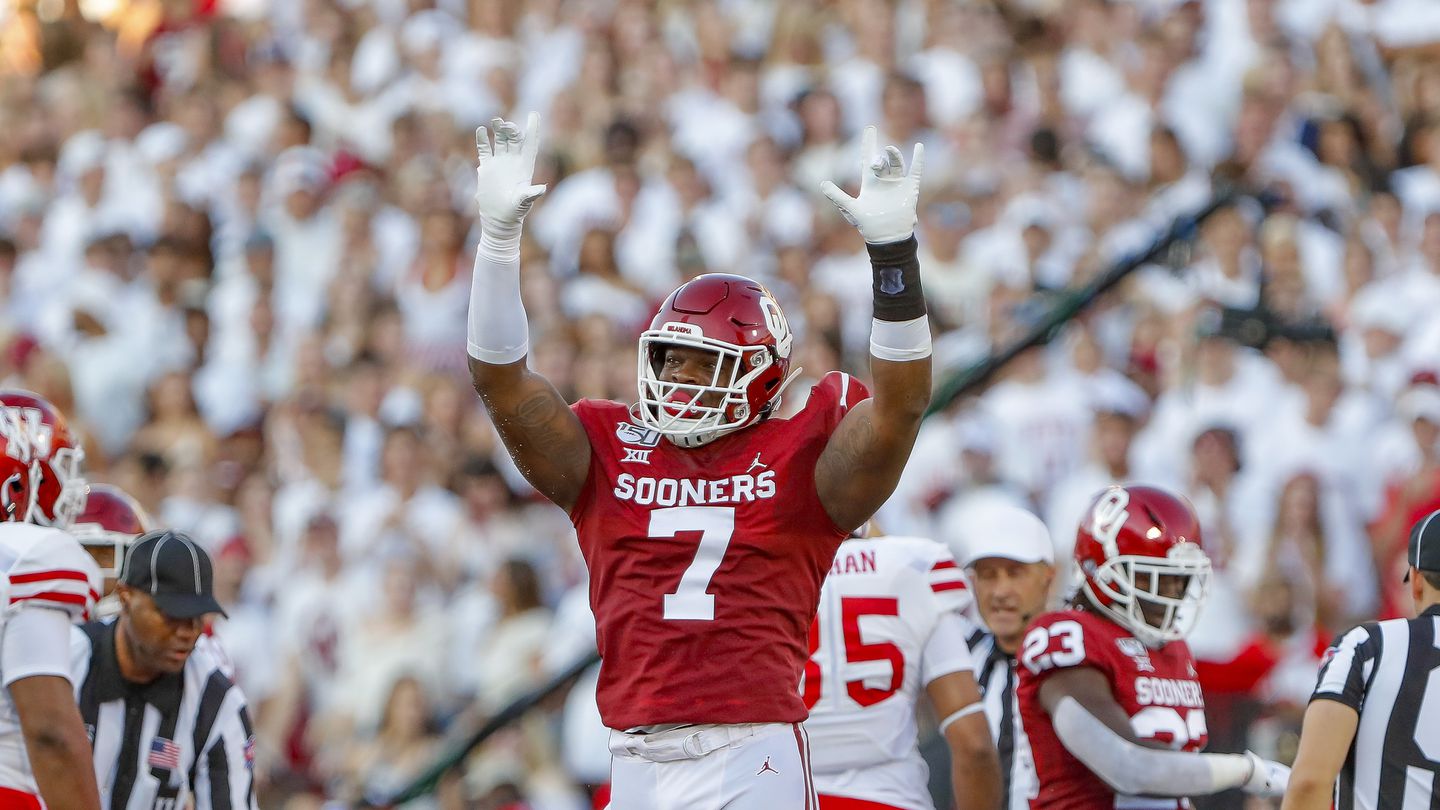 New England drafted Perkins to rush the passer. The defensive end needs a fair amount of work, but he also has a high ceiling. His balance and hand skills off the edge are fantastic.

These two qualities helped him win battles without elite speed. At Oklahoma’s Pro Day, Perkins ran a 4.71. A 4.5 is standard for an elite EDGE prospect.

Perkins missed the first five games of 2020 because of a failed drug test. He still recorded 5.5 sacks in six games, but his character is a concern. However, the Patriots are masters at fixing character concerns.

The Patriots love running backs, and they will include another player in the position room this season. This was the one pick that was very confusing for fans of the team. 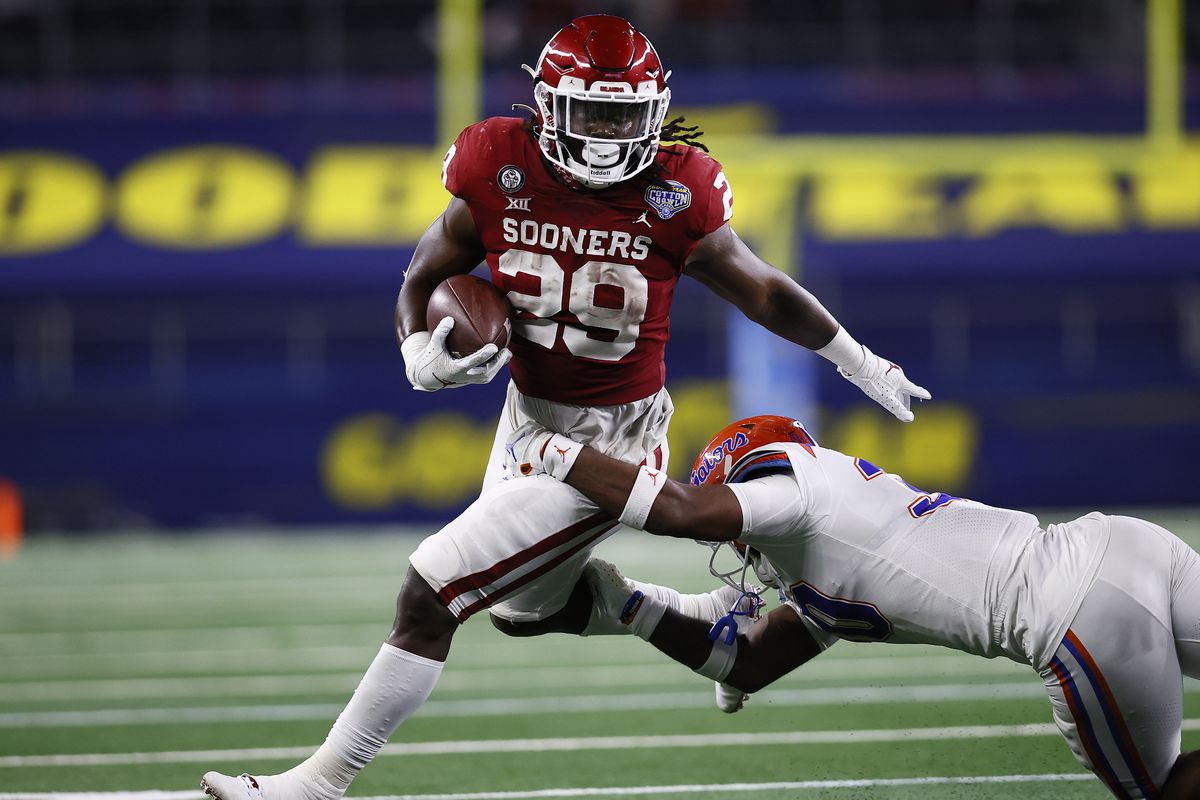 Rhamondre Stevenson is a fantastic talent at running back, and there is no denying this fact. The athlete is 6’0”, 231 lbs, and one of the most punishing runners in the draft class. Stevenson is the opposite of an invasive runner. He embraces contact, and he is a violent finisher.

The 2020 Cotton Bowl MVP can ball, but how does he fit in with the Patriots? New England does not have a running back with his style currently, but the position group is loaded.

Could Sony Michel or James White’s time in New England be coming to an end?

Cameron McGrone could have stayed in college and improved his draft stock, but he landed in a great spot to develop his skills. McGrone, who will turn 21 during training camp, needs a lot of reps.

He took over the starting linebacker job in 2019 as a sophomore, recording 65 tackles with 2.5 sacks in 13 games. The Wolverine followed this up with 26 tackles in six games during the shortened 2020 season. 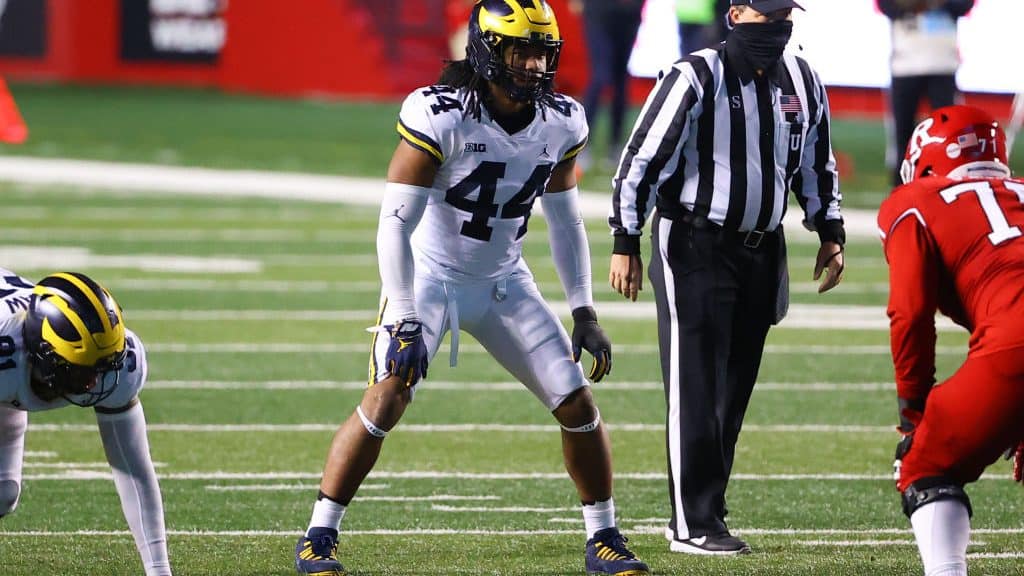 McGrone showed undisciplined play on film in 2020 at Michigan. These mistakes were made aggressively, but he forgot to read his keys on multiple occasions and got caught staring in the backfield.

The best part about the linebacker is his tackling ability. He drives through ball carriers and rarely misses tackles.

Joshuah Bledsoe was New England’s first of two selections in the sixth round. The safety plays the game with a chip on his shoulder, and he is not afraid to scream downhill to make touchdown-saving tackles. 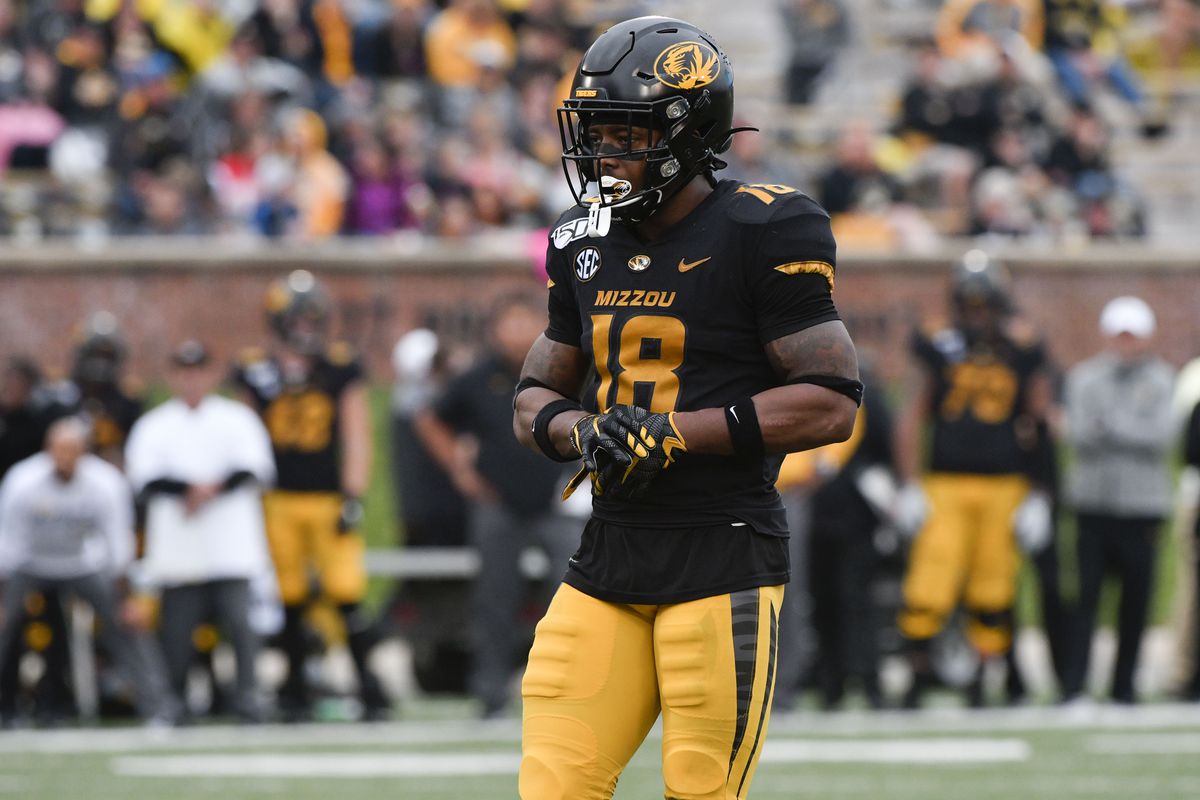 In 2020, Bledsoe had 41 total tackles with one forced fumble, one interception, and six defended passes. My favorite characteristic of the safety is his IQ. He is a multi-time SEC Academic Honor Roll selection, and his smarts have shown on tape.

Bledsoe is a football player who can sense the field. He is occasionally caught out of position, but he recovers with his explosiveness.

William Sherman was the Patriots’ only addition on the offensive line in the 2021 NFL Draft. Most likely, the offensive lineman will be a replacement, but I expect him to make the team because of his versatility.

The Patriots have a strong group of offensive linemen, but Sherman can play guard and tackle, so he should have a job. At 6’3” 304 lbs, Sherman should start training camp as an offensive guard.

The former Colorado Buffalo needs a lot of work, but I love the selection at 197th overall. Sherman has a lot of potential, and he will have time to develop behind the studs upfront in New England.

It would not be an official Bill Belichick draft if the Patriots did not select a slot receiver following the retirement of Julian Edelman. Nixon was an under-the-radar prospect at Central Florida, but I think he will have a home in New England. 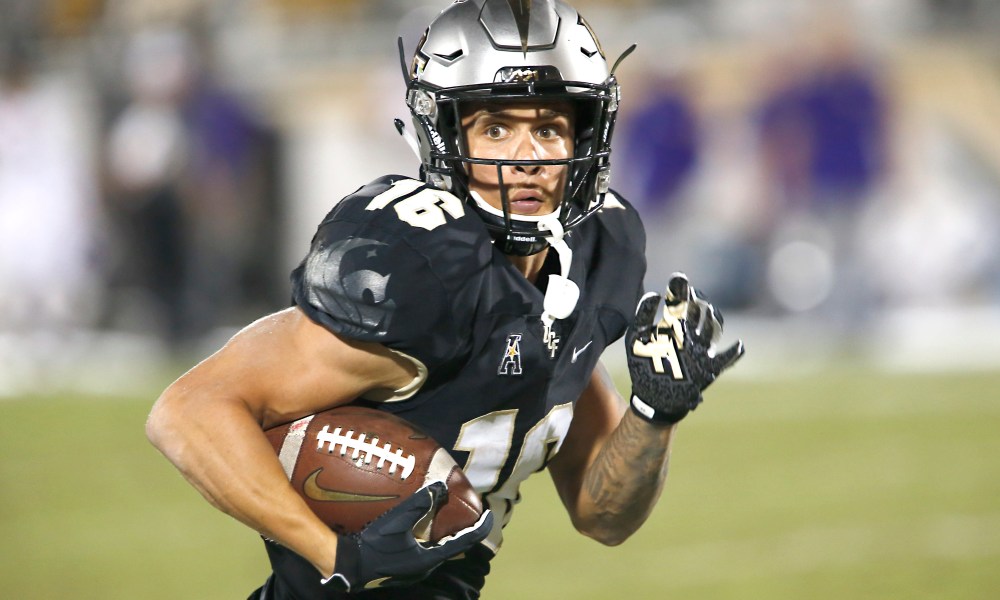 The Patriots are slot receiver fanatics, so it makes sense that they acquired Nixon. At 6’2” 190 lbs, he can fly down the field. His NFL player comparison is Robby Anderson because of his dangerous athleticism.

A shoulder injury kept him sidelined for the majority of the 2020 season. If he had not faced this adversity, he would not have gone to the Patriots in the final round.

Nixon needs to work on his ball skills, but he gets open consistently. His footwork separates him from elite talent in the secondary. The former Golden Knight will pay dividends for the Patriots if the staff can fix his occasional ball tracking issues.