Last weekend, the Arizona Cardinals went on the road to play the 49ers in a crucial divisional matchup. And they did so without starting Quarterback Kyler Murray and Wide receiver DeAndre Hopkins.

And yet, the Cardinals came away with a significant win on the road, 31-17.

On the other hand, the Panthers were 4-4 with a chance to strengthen their playoff chances. However, the Patriots came into Bank of America Stadium and dominated the Panthers, winning 24-6.

The Panthers will be without their starting Quarterback, Sam Darnold, as he was injured against the Patriots.

Panthers vs Cardinals Matchup at a Glance

The Carolina Panthers started off the season one of a few undefeated teams, going 3-0.

However, since then, they have gone 1-5. Sam Darnold is expected to miss time, Jaycee Horn is out for the season, and CMC has been in and out with injury. I would not expect the Panthers to turn around their losing streak.

The Panthers’ offense is, well, average at the best of times. They have allowed the 25 sacks, a mark that is 25th in the NFL. The Panthers are also 24th in passing yards despite being 6th in passing attempts. They also rank 24th in points. Yikes.

With Sam Darnold injured, expect the Panthers to run the ball more and rely on a defense that has more than proved itself this season. 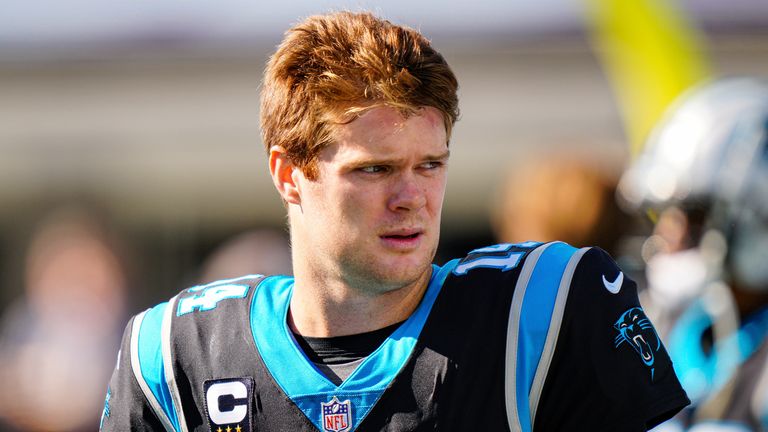 Sort of what you expect from an air raid offense, right?

What you may not expect from a coaching staff that’s a claim to fame was the aforementioned air raid offense is that their defense is top-flight.

According to Lineups.com, the unit ranks fourth in the NFL. Their most notable strengths are their defense, which ranks exceptionally well against third and fourth down conversions.

Their apparent weakness is their rush defense, which has allowed the 1k rushing yards, a stat that ranks them 19th in the NFL.

I want to say first and foremost that I am a Panthers fan; it is essential to get that out of the way. And maybe, that will make you, the reader, take this a little more seriously.

The Panthers will lose against the Cardinals. Feel free to take that Moneyline.

When betting the spread, I always like to start by looking at each team’s record against the spread (ATS).

The Panthers are much less impressive, on the other hand. Exactly like their NFL record, the Panthers are 4-5 with a 2-3 record at home and 2-2 on the road.

However, the Panthers are in a challenging situation now. They are without their starting QB, Sam Darnold. Say what you will about him, but any team missing their starting QB is going to struggle.

You know, unless the team in question is the Cardinals.

Much like with the spread, I like to look at teams records against the total. In this scenario, a loss is when a team hits the under, and a win is the team hitting the over.

Although the high-flying Cardinals shotgun-based air raid, the Birds are 4-5 against the total. Even more surprising, Arizona is 1-3 at home (3-2 on the road).

The Panthers record is absolutely what you would expect from a team that has a great defense and a poor offense: 2-7. On the road, the Panthers are 1-3, while at home, they are an abysmal 1-4.

My analysis of the total is pretty straightforward:

The Panthers will be without Sam Darnold (and even with him, the offense has struggled), so their offense will likely be, well, dysfunctional. I love P.J. Walker, but his Passer Rating would be the worst in the NFL, even at the best of times.

There is something to be said for the Panthers likely running the ball a fair amount, much like the 49ers in their first matchup and then the Packers.

The Cardinal’s offense is outstanding, and even without its best quarterback and wide receiver, they could still put 30 on the 49ers. However, I like the Panthers’ defense quite a bit, and I think Carolina can slow Arizona, much as the 49ers did in their first matchup.

So, with the Panthers having both a good defense and an offense primarily based on the rush, I think the Cardinals will be able to score but slowed.

On the flip side, I think the Cardinals will struggle offensively but should generate turnovers defensively to aid their offense.

Use the prop finder below to find all available offerings for this Panthers vs Cardinals game. You can also search for any player to see the props available for an individual.