Kansas City Chiefs quarterback, Patrick Mahomes II, has already been labeled as a future Hall of Famer in his young NFL career. This is fair as Mahomes has done more in the NFL than the majority of quarterbacks that have taken a professional snap.

Mahomes is a Super Bowl MVP, an NFL All-Pro, and an overall NFL MVP in three seasons starting for the Kansas City Chiefs. Mahomes’ amazing plays on the football field give fans the impression that the 25-year-old is Superman.

Mahomes is Superman on a football field, but this reputation does not transcend across all sports. The former NFL MVP can throw ceremonial first pitches for the Royals, but he cannot play baseball.

Let’s take a look at the disastrous baseball career of Patrick Mahomes II.

Baseball is in the Mahomes’ family blood. Mahomes II’s father, Pat Mahomes, played eleven seasons in the MLB. He was an average pitcher that never made an All-Star Game, but his MLB service time was much longer than countless pitchers who were talented enough to toe a professional rubber in their lifetimes.

Mahomes played for six teams in eleven seasons, including the Minnesota Twins, New York Mets, Boston Red Sox, Pittsburgh Pirates, Texas Rangers, and the Chicago Cubs. The right-hander was drafted in the sixth round of the 1988 MLB Draft.

He compiled a total record of 42-39 with a 5.47 ERA and 452 strikeouts in eleven professional seasons. A young Patrick Mahomes II spent his childhood around the game of baseball, but his father’s professional presence was not enough to take him away from his long-term pursuit of football.

It’s evident by the way that Patrick Mahomes II plays the game of football that he is an elite athlete. Mahomes is excellent at anything he touches, but his collegiate baseball career was a disaster.

Mahomes was always a talented football player, but scouts predicted that baseball would be his college ticket. Mahomes was ready to abandon the game of football before his junior season to focus on baseball.

However, his mother made him stick with the game of football, and it paid dividends for the Super Bowl quarterback. Mahomes took over the starting quarterback job in his junior season.

He became a three-star prospect that ultimately signed with Texas Tech, but the supreme athlete continued to excel on the baseball field.

Professionals scouts were interested in Mahomes heading into his senior year, but he was fixed on playing college football. Mahomes had a fastball that touched 93 mph, which helped him dominate opponents throughout his junior and senior seasons. 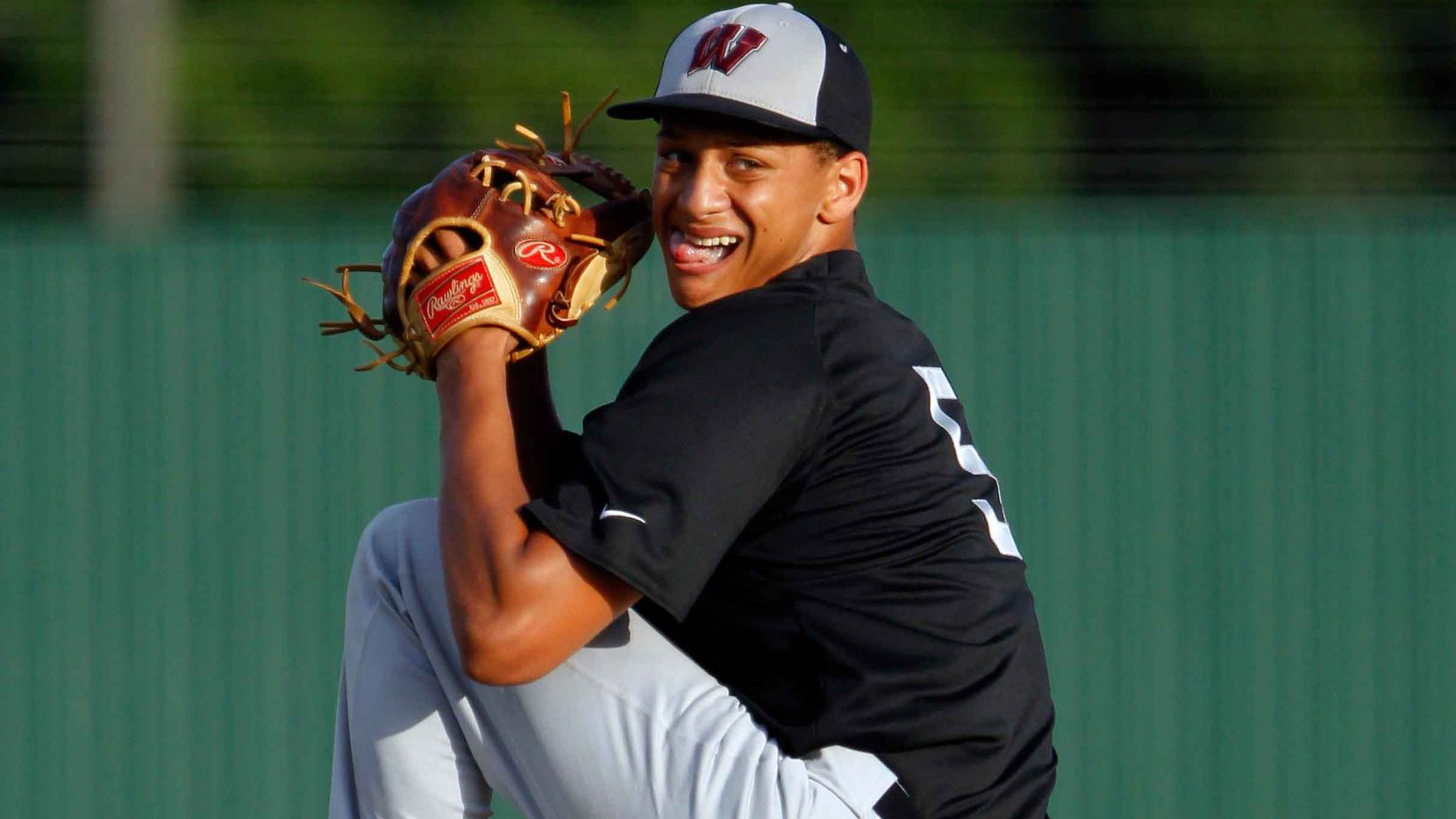 Mahomes threw a no-hitter in the 2014 Texas state playoffs, where he struck out 16 batters. Baseball America labeled him as the 419th ranked prospect in the 2014 MLB Draft. Mahomes told teams that he wanted to pursue football, but the Detroit Tigers still took him in the 37th round.

Many professional scouts saw Mahomes as a hitter and center fielder rather than a pitcher like his father. Despite this, Mahomes was not deterred from his dream of playing college football because of his professional potential on the baseball field.

Mahomes was a phenom at Texas Tech under center. He competed in 32 games for the Red Raiders in three seasons in Lubbock. The Chiefs’ 2017 first-round selection threw for 11,252 yards with 93 touchdowns in his collegiate career.

Mahomes chose to play football at Texas Tech, but he did not give up his passion for baseball. Mahomes suited up for the Red Raiders baseball program following his freshman football season. 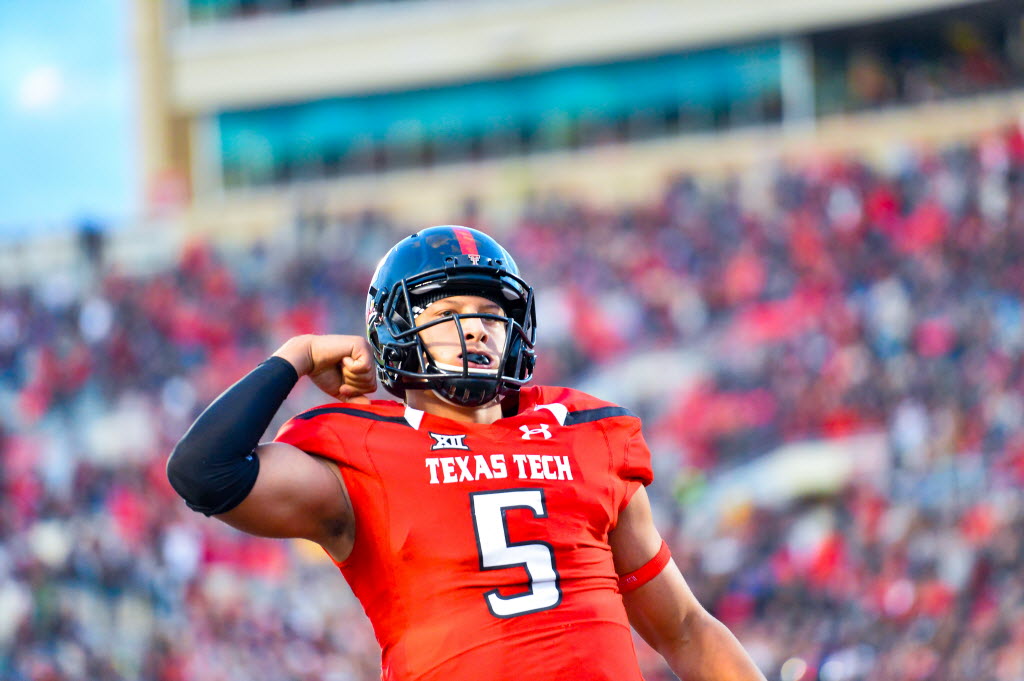 Mahomes came into pitch against Northern Illinois in an early non-conference game in February when the Red Raiders held a commanding 6-0 lead over the Huskies. Mahomes trot to the mound coincided with a standing ovation from all the Red Raiders’ fans in attendance.

The football program’s hero was taking the mound for the first time, which was evident with the crowd’s eruption. These cheers would be the final praise that Mahomes received on a baseball field at Texas Tech.

Mahomes faced three batters. He walked the first hitter and threw one pitch behind the batter’s back. He hit the second batter and then proceeded to walk his third opponent in a five pitch at-bat. Mahomes threw 15 total pitches, including 11 balls in his one outing as a collegiate pitcher.

Red Raiders skipper, Tim Tadlock, kept Mahomes on the team as a backup third baseman because he was loved in the clubhouse. He took two at-bats in his freshman season and did not record a hit.

Following Mahomes freshman baseball season, he just focused on football, and the rest was history.

I am delighted that Mahomes selected football because he is one of my favorite players to watch in the NFL. Although, it’s always fun to look back on the disastrous baseball career of Patrick Mahomes II for a good laugh.

Follow me on IG @tannerkern and Twitter @tannerkern_ for game previews, betting analysis, and the best stories from the sports world. Be sure and keep up with the Sports 2.0 Network, Sports 2.0 Twitter, Basketball Articles, Baseball Spotlight, and  Knup Sports for all of my latest content and best takes from around the sports and sports betting world as well!!