In preparation of the Jan. 13 start date, I’ll be posting my KnupSports NHL Awards Prediction Series, culminating in a season preview for every team and a Stanley Cup prediction. To start, I’ll be predicting the Hart Memorial Trophy for NHL as the “player judged most valuable to his team.”

The return of NHL hockey is less than a month away and will look, unlike any season we’ve ever seen before. With the all-new Canadian division, abbreviated 56 game schedule, ad sponsorships on helmets, and much more, the 2021 season will certainly be one to remember.

While Edmonton’s Connor McDavid (+450) and Colorado’s Nathan MacKinnon (+550) are the favorites to win the Hart, I’m going with one of the players tied for the third-best odds (+1000). Artemi Panarin (New York Rangers) and Leon Draisaitl (also with Edmonton) will no doubt have excellent seasons, but Auston Matthews of the Toronto Maple Leafs is my pick to win the Hart in 2021.

Matthews cracked the Top 10 of Hart Trophy voting for the first time last year (his previous highest finish was 11th during his rookie season in 2016-17). When the season paused, Matthews had recorded 47 goals and 33 assists in 70 games, one behind Washington’s Alexander Ovechkin and Boston’s David Pastrnak for the most in the league. Now heading into his fifth season at 23 years old, Matthews’ best days are ahead of him.

Matthews has quickly evolved into one of the NHL’s most prolific goal scorers, exceeding 34 goals in each of his first four seasons. Since his rookie year, the Maple Leafs have been in the top five in goals for every season.

His 2019-20 heat map shows the ability to score from anywhere on the ice. While most of his damage does come from directly in front of the net, Matthews’ ability to get to those high-danger areas is among the best in the league. 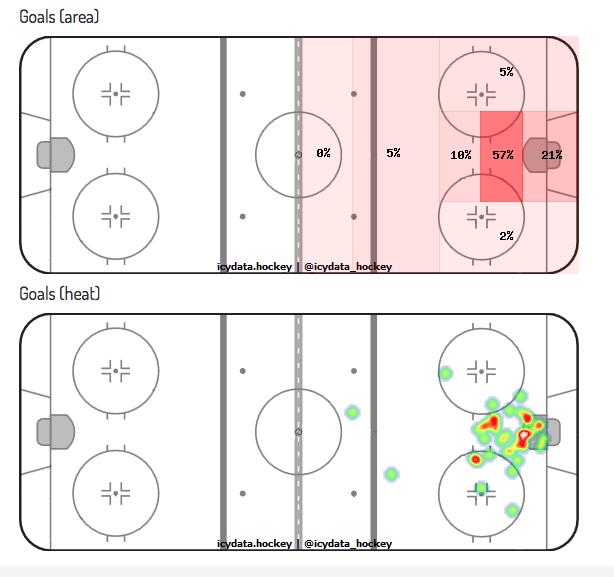 While his ability to drive the net, stay strong on the puck, and release a deadly shot are the calling cards of his game, Matthews’ defensive metrics have continued to improve. Only teammate Alex Kerfoot has better numbers for the Leafs in recovering loose pucks and rebound recoveries. He led all forwards in 2019-20 in takeaways (78, tied with Mark Stone of Vegas), and trailed only Carolina’s Jaccob Slavin for most in the league. Matthews’ 60 blocked shots saw him finish 12th among all forwards.

Few people should be happier to hear the news of the All-Canadian division than Matthews. Instead of having to face goaltenders like Tampa Bay’s Andrei Vasilevskiy or Boston’s Tuukka Rask, Matthews will be playing at least eight games this year against teams and goalies who struggled defensively and in net last season.

Edmonton’s Mikko Koskinen and Mike Smith combined for a 2.85 GAA and .910 save percentage. Only Anaheim, Minnesota, San Jose, and Nashville posted worse numbers among their goaltending tandems in the Western Conference (Vegas would fall into this category as well, but the Robin Lehner trade complicates this statline).

Ottawa acquired Matt Murray on the second day of the NHL Draft to shore up their goaltending woes, but Murray didn’t look particularly impressive in 2020 According to Hockey Reference, Murray ranked 43rd in goalie point shares while playing with the Pittsburgh Penguins, an annual playoff contender. Going to an objectively much worse team in Edmonton, Murray will likely continue to struggle and face an even larger workload.

Vancouver lost goaltender Jacob Markstrom to Calgary and brought in Braden Holtby to bridge the cap while Thatcher Demko prepares to take over the starting job. Holtby ranked 33rd in goalie point shares in 2019-20, and goes to a Canucks squad that allowed the fourth-most shots against per game a year ago, allowing even more than the 17-49-5 Detroit Red Wings.

One of the biggest things that could hurt Matthews’ Hart case is actually one of the things that could help him too. The Maple Leafs have a ton of offensive firepower around Matthews, but could John Tavares, Mitch Marner, and William Nylander keep Matthews from winning?

In four seasons, Matthews has finished as the team leader in points twice; that was during his rookie year and during the shortened 2019-20 season. While he makes his linemates and teammates better, it’s possible we see such strong numbers from the Leafs that it hurts Matthews’ case. Additionally, in two of Matthews’ seasons, he missed more than 10 games. If he can’t stay on the ice (though he certainly should be able to), he could lag behind the other Hart Finalists, as we saw with McDavid a year ago.

If Matthews doesn’t win, don’t be surprised to see Taylor Hall, Connor Hellebuyck, or Mark Stone in the mix to win. However, Matthews has a golden opportunity this season, and I think he’ll take full advantage.