The start of the 2021-22 NHL Regular Season is officially less than a month away with an expected start of October 12. There are a pair of games on the slate (Pittsburgh Penguins at Tampa Bay Lightning at 7:30 PM Eastern, Seattle Kraken vs Vegas Golden Knights at 10:00 PM Eastern), and hockey fans will get the first taste of the new television deal with ESPN.

Whether you’re playing fantasy hockey or just enjoying the game, here are five players poised for a breakout season during the 2021-22 season. 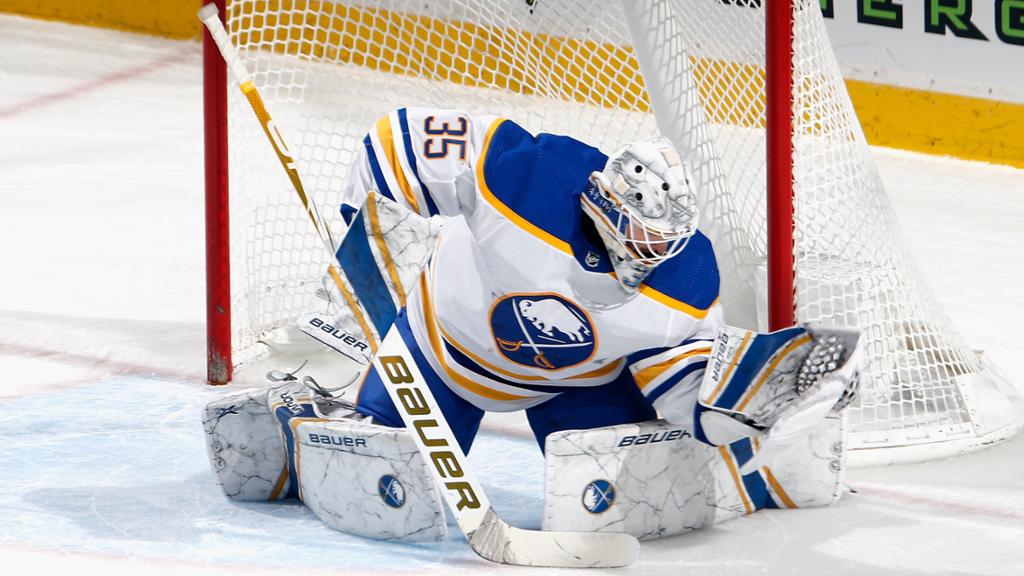 Few players in the league find themselves in a better position than they were a year ago than Boston Bruins goaltender Linus Ullmark. Having spent the last six seasons with the Buffalo Sabres, all of which came without a playoff appearance, Ullmark signed with Boston in free agency and should immediately take over the starting role, making him one of the NHL breakout players.

Over the past three seasons, Ullmark has 5.43 goals saved above average (GSAA), which becomes even more impressive knowing the Sabres have given up the fifth-most goals of all NHL teams. For Ullmark to have a positive GSAA is outstanding, and moving from a bottom-feeder club to a Cup-contending team like the Bruins, his numbers should only improve this year.

Kaapo Kakko’s career has yet to live up to expectations since he was selected second overall in the 2019 Draft. Perhaps Kakko struggled to adjust to life in the United States after spending his entire career in his native Finland before jumping to the NHL. Or maybe as fans and pundits, we expected Kakko to see similar success to other second overall picks taken in drafts before, such as Jack Eichel in 2015, Patrik Laine in 2016, and Andrei Svechnikov in 2018.

After trading Pavel Buchnevich to the St. Louis Blues, there’s an opening for Kakko on the top line to play with Artemi Panarin and Mika Zibanejad. Kakko has 19 goals and 21 assists through 114 career games, but if takes a step forward this year and earns those top-line minutes, he could easily double both of those numbers.

Kakko is tough to knock off the puck, with great hockey sense and excellent puck skills. The struggles he’s experienced so far are atypical for someone with his skill set. He’s still very early in his career at 20 years of age, but I expect this to be the year he puts it all together and becomes the star player he was drafted to be.

To some, Ty Smith may have already been a breakout player, leading rookie defensemen in assists (21) and points (23) by a large margin. Smith’s numbers came in a year where the Devils scored the sixth-fewest goals in the league. New Jersey captain Nico Hischier missed 35 games, and Kyle Palmieri and Travis Zajac were traded at the deadline. Still, Smith led all Devils defensemen in points and finished seventh on the team in the same category.

So why is Smith looking at an even bigger 2021-22 campaign? Because New Jersey added serious talent to the blue line, trading with the Colorado Avalanche for Ryan Graves and signing Dougie Hamilton in free agency. The Devils also brought in Tomas Tatar to the forward ranks, which should increase the power-play efficiency (New Jersey’s power play converted on 14.2% of its opportunities last season, fourth-worst in the league).

With an improved team around him and a season of experience under his belt, expect big things from Ty Smith in 2021-22.

The oldest skater on this list, Garland is in a similar situation to Ullmark. He has spent the entirety of his career on a team that has struggled to find success; Arizona has just one playoff appearance since Garland was drafted in 2015.

The Canucks traded for Garland while acquiring defenseman Oliver Ekman-Larsson in a massive trade just before the 2021 Draft (Garland and Ekman-Larsson to Vancouver, Jay Beagle, Loui Eriksson, Antoine Roussel, a 2021 first-round pick, a 2021 seventh-round pick, and a 2022 second-round pick to Arizona). The Coyotes also retained 12% of Ekman-Larsson’s salary.

Still, with that high of a return to Arizona, especially given how poor Ekman-Larsson’s contract looks (six more years at $7.26 million AAV) relative to recent performance. According to JFresh Hockey, in 2021, Ekman-Larsson ranked last among defensemen with 700 or more even-strength minutes in expected goals for percentage.

But back to Garland. The versatile forward can play on either wing and scored 22 goals in the 2019-20 season. However, he’s yet to break 40 points in his career. That should change this year when he’ll either play with Elias Pettersson or Bo Horvat up the middle and with one of Brock Boeser, J.T. Miller, or Nils Höglander on his opposite wing. The Pacific Division is also the weakest on paper entering the season, giving Garland a prime chance to establish himself as a true top-six forward.

Noah Dobson has an excellent opportunity to become a prominent force on the New York Islanders’ blue line this year. New York-traded Nick Leddy to the Detroit Red Wings, opening up a chance for significant ice time. Leddy averaged more than 21:30 of ice time per game last season while Dobson averaged just under 16:30.

The 21-year old blueliner was taken 12th overall in the 2018 Draft, and with other first-round defensive prospects from that class already making their mark (Buffalo’s Rasmus Dahlin, Vancouver’s Quinn Hughes, and Columbus’ Adam Boqvist), it’s time for Dobson to do the same.

Dobson is an incredible skater and projects as a second-pairing defenseman at even strength. He should also slot in on the top power-play unit. Of the 21 assists Dobson has in his career, six came with the man advantage. If he can continue to move the puck well, especially on the power play, expect Dobson to more than double the 14 points he scored last season.