The quality and competitiveness of each World Cup group can often vary dramatically, given the fact that there are often lackluster nations in the competition taking part.

There are eight teams in each of the four pots, and surprisingly, a very solid balance of firepower has been highlighted after the draw this past week. There is no clear and obvious “group of death”.

I am going to rank the potential excitement each group can bring to the table, and how many classic and close matches they can provide. As we move down the list the groups will also become more unpredictable.

Let’s get into it!

I’m not expecting too many surprises in this group, given the quality of the teams from pots 3 and 4.

Of course, the reigning World Cup champions, France, are still unbelievably strong with the likes of Kylian Mbappe, Karim Benzema, and N’golo Kante, and Denmark are continuing to improve as a nation as well.

Christian Eriksen is back from his Euro horror moment and in fine form for both club and country, which is fantastic to see.

Christian Eriksen in his return to international football this past month.

The Danes also have the likes of Mikkel Damsgaard, Pierre Hojbjerg, Simon Kjær, and Kasper Schmeichel who will all be too strong for the potential winners of IC Playoff 1 and Tunisia.

I have to clarify that this ranking is no disrespect to Lionel Messi and Argentina, and rather a suspicion that Poland, Mexico, and Saudi Arabia aren’t up to the standards of most teams in this competition.

Argentina will likely cruise through this group, coming off a 31 game unbeaten run, as they finally have a player in Cristian Romero to command their defense.

Mexico is a team that always seems to perform in the World Cup; however, I’m expecting them to struggle this season.

A Robert Lewandowski-led Poland has been disappointing on the international stage in recent years, and they have strengthened recently with the addition of Matty Cash to the roster.

I believe Saudi Arabia will struggle in this group unless striker Salem Al-Dawsari and his present company have the tournament of their lives. 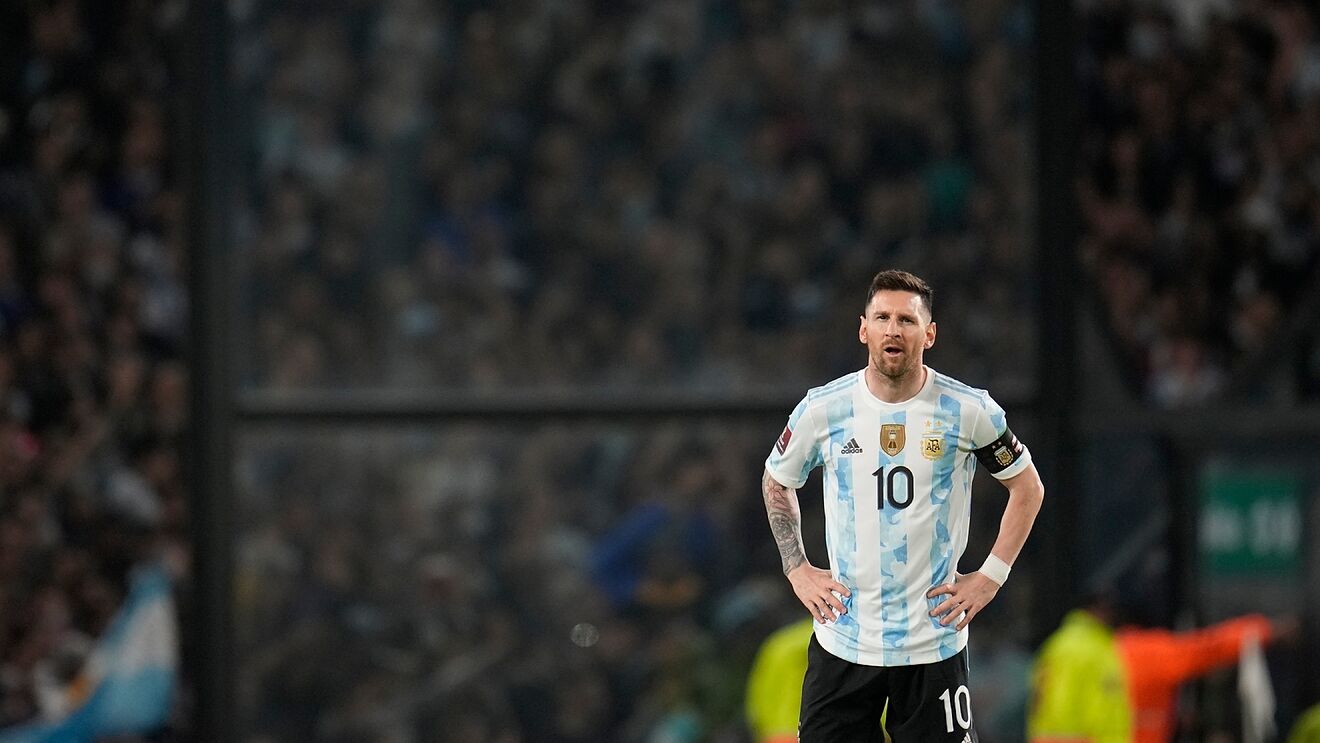 Can Messi finally win a World Cup with Argentina?

This is difficult to write as an American, but I’m expecting England to cruise to a first-place finish in Group B. The other three sides are not weak by any means, however, when compared to the rest of the teams in the tournament, the quality is perhaps lower.

USA is a strong up-and-coming side with quality youngsters like Gio Reyna, Brenden Aaronson, Christian Pulisic, Weston McKennie, and Tyler Adams, although the inexperience could pose an issue for the USA.

I also do not believe Gregg Berhalter is the right man to lead those inexperienced players into this World Cup, and England should not struggle with them.

Representing the Asian Football Confederation is Iran, who will be another underestimated team in the competition. They topped their World Cup qualifying group this year, finishing above South Korea with 25/30 possible points. It will be interesting to see how they fare in this competition, led by Porto striker Mehdi Taremi.

Finally, I believe Wales will come out on top in the Euro Play-off and join these three teams, rounding out a lackluster group, bar the three lions. If they are able to do so, we all know what Gareth Bale is capable of when captaining his country. 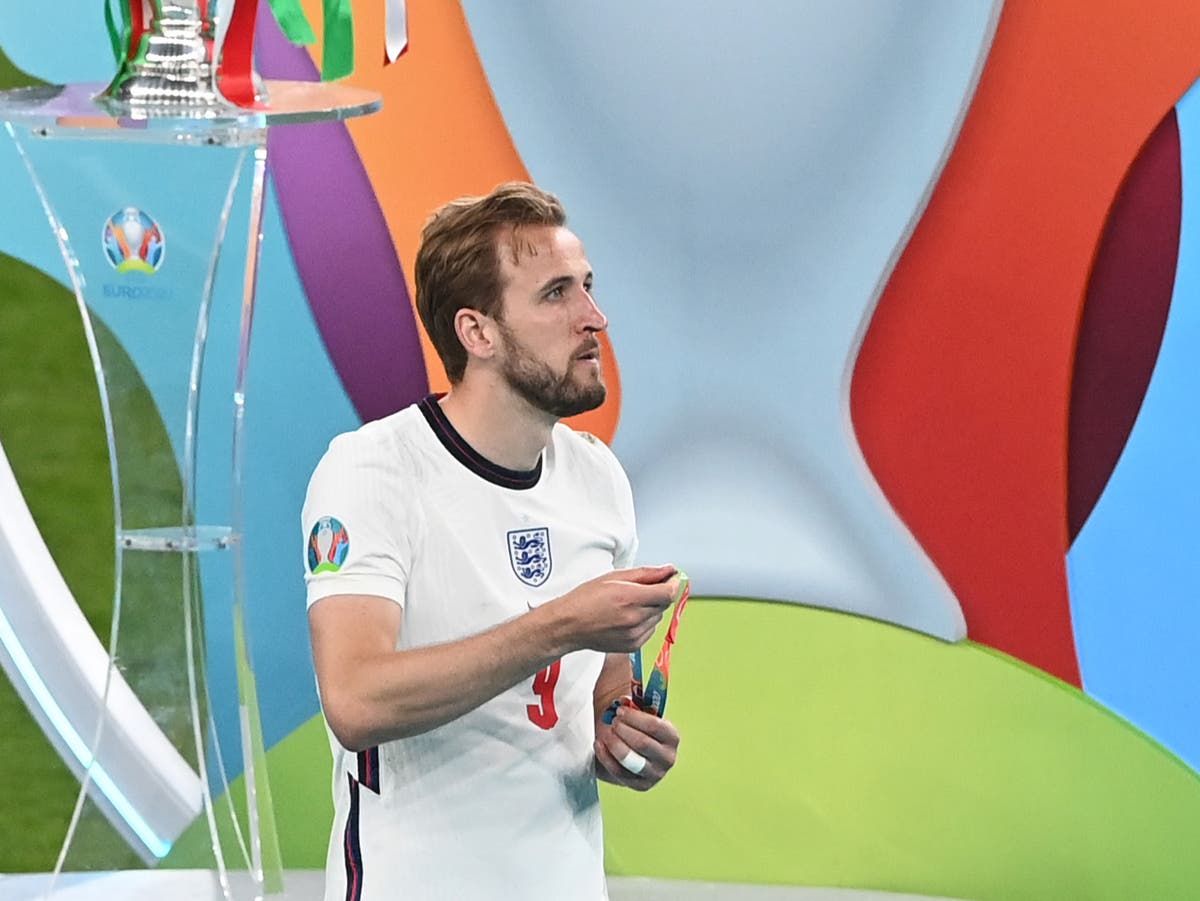 Harry Kane and England came up just short at Euro 2020.

Ben Davies and Joe Rodon provide excellent chemistry in the back, both being players from Tottenham, however, I’m afraid it won’t be enough for them.

Qatar could not have gotten many more difficult groups here given the fact that they have to face the Netherlands, who were a Pot 2 side.

There are three excellent teams in this group, and I’m afraid that the hosts are not one of them.

The Netherlands has an absolutely frightening pair of center-backs, Virgil van Dijk and Matthijs de Ligt, and have a youthful duo of Frenkie de Jong and Ryan Gravenberch to run the midfield. 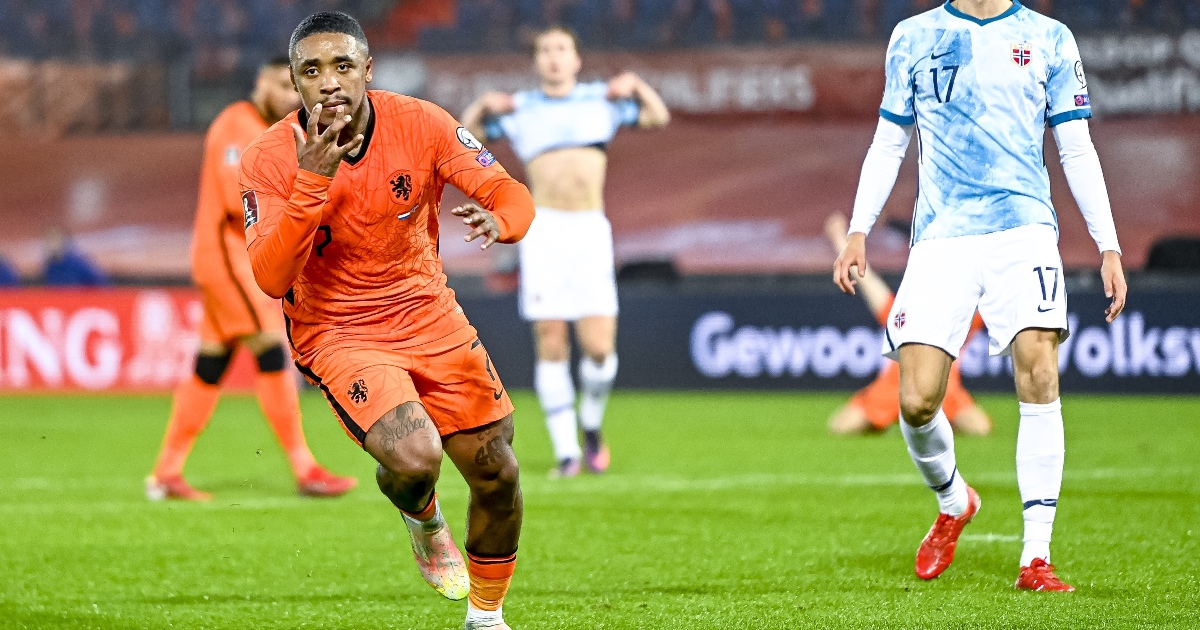 Steven Bergwijn celebrating the goal that took Netherlands to the World Cup.

This group also features the winners of the 2022 African Cup of Nations, Senegal, who have pace in abundance with wingers Sadio Mane and Ismaila Sarr. Keeper Edouard Mendy has also become a top player and will be important in this squad’s World Cup run.

Ecuador has earned themselves a well-deserved spot in this tournament after finishing 4th in the CONMEBOL World Cup qualifiers over teams like Chile and Colombia; however, I don’t think they will be able to compete with Senegal and the Netherlands.

After the first two teams in this group were drawn, many automatically claimed that it was the group of death, however, the teams in pots 3 and 4 are not as formidable.

Japan and the winner of IC Playoff 2 will not be able to compete with Germany and Spain in this competition, and for that reason, this group is not ranked higher.

Spain was very impressive in last year’s Euro tournament, and are led by some fantastic young players, like Pedri, Rodri, Pau Torres, Gavi, and Ferran Torres. Luis Enrique is a fantastic coach and I’m excited to see Spain in this competition.

Germany is also a terrifying side with new manager Hansi Flick, who had overwhelming success with Bayern Munich in his last managerial stint. Manuel Neuer will be between the sticks as always, and Joshua Kimmich and İlkay Gündoğan will man the midfield all tournament long.

Japan has two fantastic players in Takefusa Kubo and Takehiro Tomiyasu; however, it won’t be enough to quality over Spain and Germany. 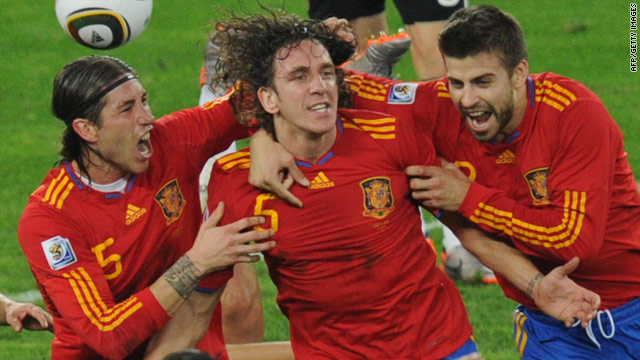 I don’t think either of Costa Rica or New Zealand could defeat these teams themselves, so this group is simple in my eyes.

Without a doubt, this will be one of the most exciting World Cup groups, given the unbelievable balance of talent, bar Belgium perhaps, as they are so strong.

Kevin De Bruyne and Romelu Lukaku will look to lead Belgium to their first major trophy in history, after so many disappointing campaigns. It will likely be their last opportunity to do so in the near future, as their golden generation is aging.

My dark horse in this group is Canada, who is led by two phenomenal players in Jonathan David and Alphonso Davies. Canada also topped their World Cup Qualifying group, over the likes of Mexico and the USA, and had to do a lot of the work without Davies, who has been struggling with health issues. 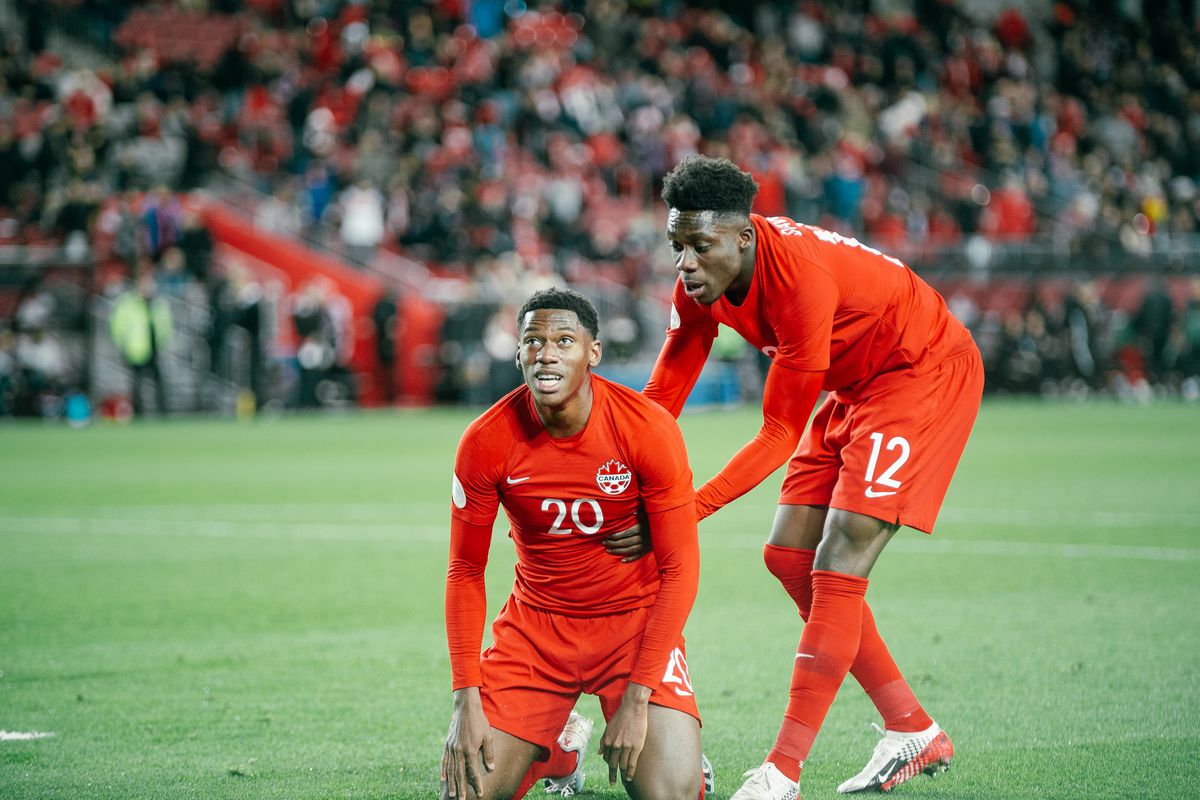 David and Davies will surprise many this year for Canada.

This group also features the 2018 World Cup runner-up, Croatia, who are arguably a lot weaker than they were in the last tournament. Luka Modric is still pulling the strings for Real Madrid at the age of 37, and his quality will be vital for Croatia if they have aspirations of qualifying for the knockout rounds. Mateo Kovačić is another unbelievable player that Croatia has available.

Finally, since Morocco won’t have Hakim Ziyech at their disposal, who is retired from international football, I believe they will struggle. Achraf Hakimi is a brilliant footballer, but I just don’t believe his contribution will be enough to help Morocco advance here, amongst three other fantastic sides.

Brazil is the most successful team in World Cup history, with five trophies, and their squad might be the strongest we’ve seen in a while.

While I believe the side led by Neymar, Casemiro, Marquinhos, and Vinicius Júnior will top this group, I could see any of the other three teams in this group stealing the 2nd spot. 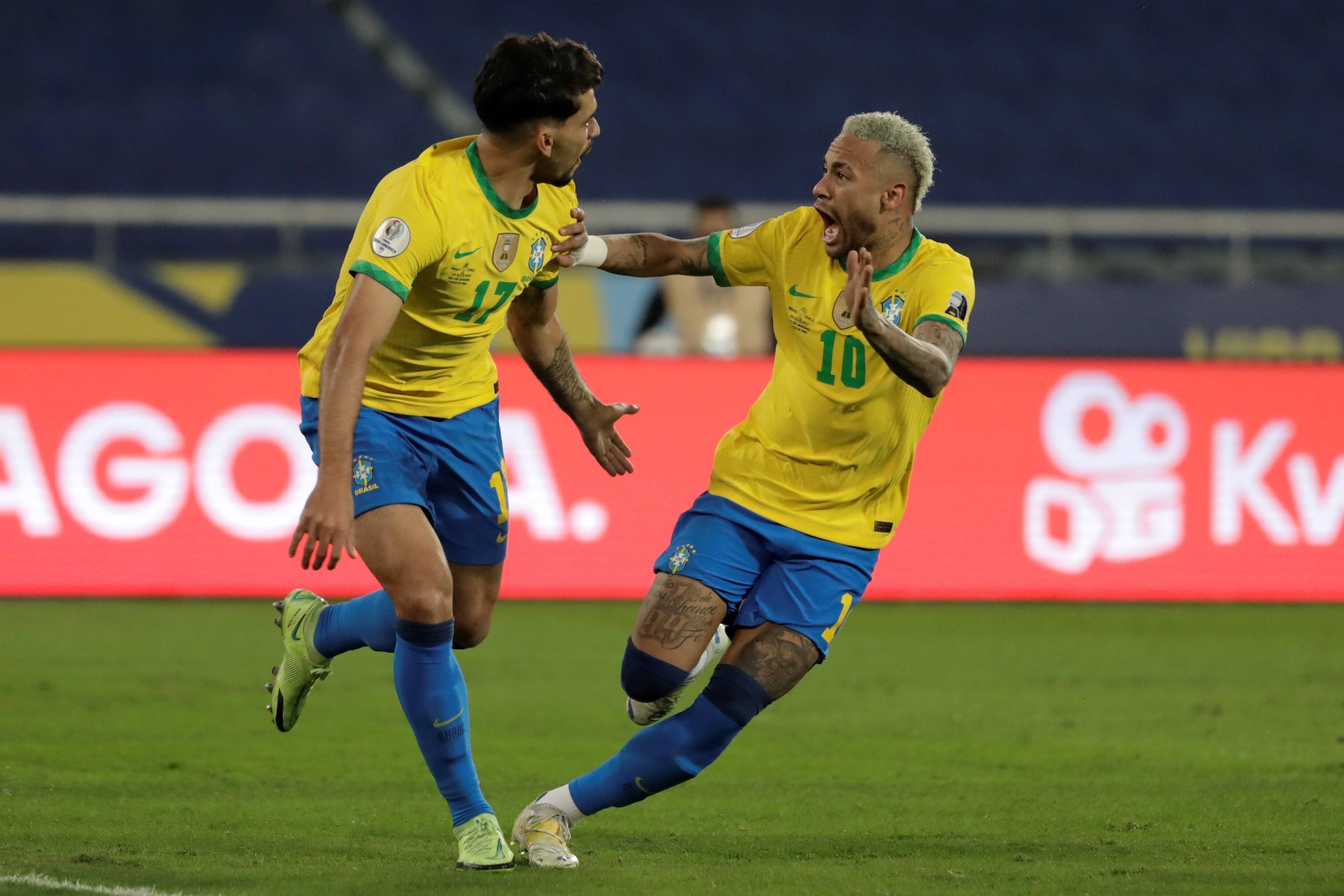 Neymar celebrating a goal against Peru with Lucas Paqueta.

Serbia is a side that I am particularly fond of, as they have one of the best young strikers in the world, Dusan Vlahovic, at their disposal. They also have other brilliant players, like Sergej Milinković-Savić, Dusan Tadic, Filip Kostic, and Aleksandar Mitrović.

Switzerland is coming off an excellent Euro tournament and is led by Yann Sommer and Denis Zakaria.

Finally, Cameroon is another strong side in this group, with a strong striking partnership of Vincent Aboubakar and Karl Toko Ekambi that we saw perform this past African Cup of Nations.

Group H is my declared group of death in this upcoming World Cup in Qatar.

Not only do we have Cristiano Ronaldo competing in this group, but we get to see a rematch of the famously controversial World Cup 2010 Quarter-Finals match between Ghana and Uruguay, and Heung Min Son’s South Korea.

In 2010, Luis Suarez deliberately stopped a goal on the line with his hand and saved a goal that ultimately won them the match. Suarez was sent off, however, the match went straight to penalties after this incident, and Uruguay advanced to the Semi-Finals. It’s safe to say that Ghana is seeking revenge in Qatar. 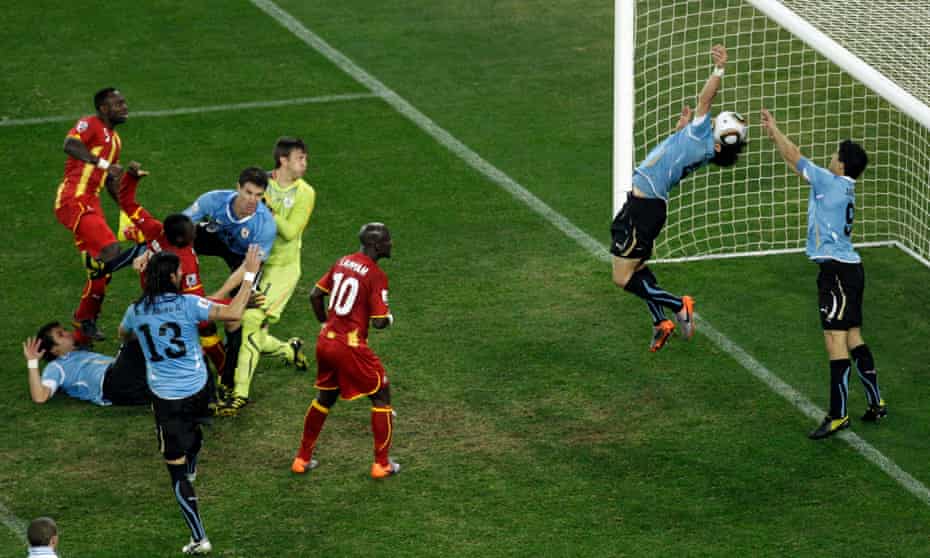 Luis Suarez, on the goal line, ready to save the day and become a villain.

Uruguay’s squad is weaker today compared to that squad with Diego Forlan, but they are still very strong.

They have some excellent players at their disposal like José María Giménez, Rodrigo Bentancur, Federico Valverde, Suárez, and Darwin Nunez, and I am very excited to see them compete.

Ghana struggled in the 2021 African Cup of Nations, although they still have some solid players, including Thomas Partey, Kudus Mohammed, and Jordan Ayew available.

The group favorites, led by captain Cristiano Ronaldo and other fantastic players like Bernardo Silva, Diogo Jota, and Bruno Fernandes will look to win Portugal their first World Cup in their history. I have doubts about their coach Fernando Santos, but their star power should be enough.

Lastly, South Korea is a side that loves World Cup competitions, and Heung Min Son is a player that can help them shock the world. Hee-Chan Hwang and Min-Jae Kim are also fantastic players that will make this group even more competitive.