Manchester City has officially kicked off the Harry Kane sweepstakes by submitting a bid worth at least £100 million, according to The Guardian’s Monday report.

Kane was the most lethal attacker in the English Premier League last season, leading all players with 23 goals and 14 assists. His personal success was overshadowed by a seventh-place team finish at Tottenham Hotspur, prompting the 27-year-old Englishman to request a transfer after spending 16-years at the club.

Tottenham has reached a UEFA Champions League Final and finished as high as second domestically during Kane’s time in North London but is yet to capture a piece of hardware. The lethal frontman is right in the prime of his career and fancies a move to a new home to maximize his production during his best years and finally win some trophies.

Reports of Kane requesting a transfer first broke last month and were met his predictions as to where he may end up: Chelsea seemed to be an obvious target because of their need for a goal scorer and financial capability, but a long-stand rivalry between the clubs diminished this possibility. Paris-Saint Germain has been floated around as another option, but they are already doling out a boatload of money to Kylian Mbappe and Neymar, among others. 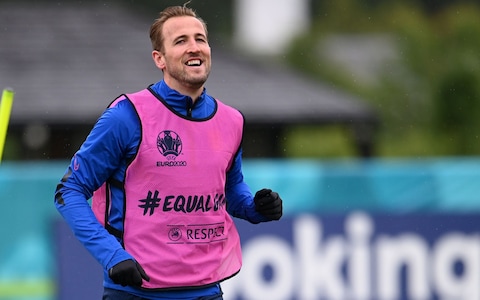 Manchester City has officially kicked off the Harry Kane sweepstakes by submitting a bid worth at least £100 million, according to The Guardian’s Monday report.

The last team left standing was Manchester City, who Kane hinted at wanting to join by stating that City’s midfielder Kevin de Bruyne was the player that he would most like to play with.

“Some of the balls I see him put in for City are just a striker’s dream,” said Kane in May.

Tottenham had hoped to convince Kane to stay by bringing in a new manager, but with Mauricio Pochettino looking to head elsewhere, Antonio Conte rejecting the club’s proposal, negotiations falling through with Paulo Fonseca, and fans rejecting Genarro Gaattusp, Spurs are now back to square one— needless to say, this has not helped peak Kane’s interest.

Manchester City looks to be moving in on a potentially record-breaking transfer for the talisman, having never spent more than £65 million on a player in the club’s history. The reigning Premier League champions are also reportedly willing to include Raheem Sterling, Aymeric Laporte, or Gabriel Jesus in the deal.

City played without a striker for a majority of last campaign and lined up for the Champions League Final without a recognized number-nine, adding a prolific goal-scorer like Kane to their potent attack, and rock-solid defense could spell the end for every competing team in the league unless serious additions are made.

This move would also put pressure on a team like Chelsea, who defeated their rivals in the Champions League Final, to pull off a transfer for Borussia Dortmund’s Erling Haaland.

Daniel Levy— the owner of Tottenham— is known as a tough negotiator, so conversations for Kane will likely go on for a while before a decision is made. If City and owner Sheikh Mansour are unwilling to fork over the asking price for Kane, Levy would have the option of keeping Kane and risk him sitting out. Kane signed a six-year contract in 2018 and would not be a free agent until 2024, giving Tottenham a certain amount of leverage in negotiations for their long-time star.

Harry Kane’s status at the club is one of the biggest question marks in world football right now; though he has made it clear that he is focused on captaining England at the Euros and turning in good performances (which he has not delivered two games in), he was the most impressive player in the best league in the world last season and had a chance to break the Prem’s record for goals scored in a career. To say that he tips the balance of power would be an understatement. MLS Power Rankings For May 1